The short is a four and a half minute video performed in Russian and filmed in Kiev, Ukraine. It shows the final moments before the Great War of 2013.

An elderly man listens to the radio broadcast warning about the missile launch. He rushes outside, urging people to seek cover in the subway. Eventually the Civil Defence "ATOM" signal can be heard and the chaos on the streets ensues. Not everyone is lucky enough to get to the shelter in time, though.

As their time runs out, the station commander orders to lock the doors and fires a warning shot in the air. After a change of heart, however, a child is taken by the commander from his mother. The airlocks are sealed and the movie flash forwards twenty years, showing an armed man walking up the escalators to the surface and ends with a panorama of the ruined city.

A countdown made its appearance on the 14th of May at a website named "Enter the Metro", hinting at a live action short film. While very little information would surface on the film until its release on the 24th of May, several promotional materials appeared in the weeks beforehand. On the 16th, 18th, 22nd, and 23 May several preview screencaps were posted on the official Facebook page and on the 21st a teaser trailer was uploaded on the official YouTube channel.

Some of the 4A Games employees that participated in the filming

Ksenia Kozhuhova, an actress that played the role of the Mother 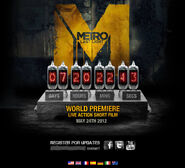 The commander walking in the station

The old man listening to the radio

The insane preacher hailing the end of the world

The mother holding her baby
Add a photo to this gallery

Add a photo to this gallery
Retrieved from "https://metrovideogame.fandom.com/wiki/Metro_Live_Action_Short?oldid=69779"
Community content is available under CC-BY-SA unless otherwise noted.