Metro 2033 has other uses. Please see Metro 2033 (Disambiguation) for other meanings.

This is the article page for the Metro Series. For related articles please refer to the category page.

The Metro Series, is a collection of Post-Apocalyptic Horror / Thriller / Fantasy Science Fiction novels and video games created by the Russian author and journalist Dmitry Glukhovsky and 4A Games.

The Metro universe is born in the aftermath of nuclear war between Russia and an unknown number of other countries. In the nuclear exchange, the surface of Moscow has become heavily irradiated. The lethal radiation levels have produced horribly mutated creatures who roam the surface of Moscow. Seeking shelter from the nuclear wasteland, the surviving humans retreated into the Moscow Metro, where they have eked out a living for several years. But the tunnels of the Metro are home to even more dangerous mutants that threaten to exterminate the remnants of civilisation. 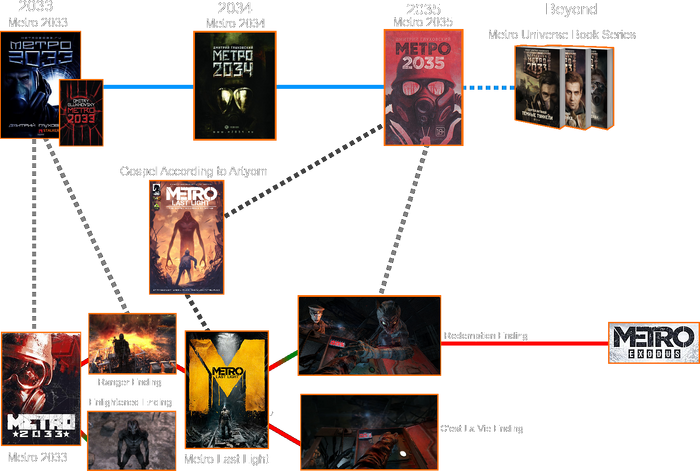 The main canonical series is authored or co-authored by Dmitry Glukhovsky.

The series of suspect canon are stories that have not been written by Dmitry Glukhosvky, but have been approved by him and acknowledged as set within the universe of the franchise. Views on whether these works should be considered part of the official canon differ among fans.

The non-canonical content has not been written by Dmitry Glukhosvky and it consists of stories that reimagine his novels and invent extended endings for them, as such they cannot exist within the same universe.