Causes damage and sets an area or enemy on fire

Molotov Cocktail, or simply a Molotov, is a throwable incendiary weapon that appears in Metro Exodus.

Molotovs function very similarly to Incendiary grenades from Metro: Last Light, with the main differences between these two weapons are cosmetic. Molotovs shatter on impact, igniting the flammable liquid inside and creating a fireball, setting anything or anyone it hits on fire. The area it hit also remains burning for a short period of time, creating an obstacle that human enemies will usually avoid, but mutants will just mindlessly go through, setting themselves on fire as a result. This means, that same as the aforementioned incendiary grenade, Molotovs are especially effective against large hordes of mutants in confined areas.

Molotovs are only rarely found in the game world, although they are still a bit more common than Frag Grenades. They can be crafted at a workbench; one Molotov requires 10 Materials and 40 Chemicals to produce. The player can carry up to 5 Molotovs by default and 10 with the Throwables upgrade for their carrier vest.

Crafting Molotovs at a workbench 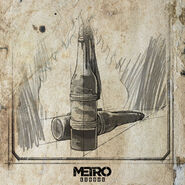 The Molotov Cocktail as it appears in Artyom's diary
Русский
Community content is available under CC-BY-SA unless otherwise noted.
Advertisement