The Rangers of the Order

Main location of the Metro Series.

Moscow (Russian: Москва) is the capital city of Russia, and the place in which most of the Metro Series is set.

After a devastating nuclear war in 2013 between Russia and a number of unknown countries, the surviving population retreated into the large metro system, originally designed as a fallout shelter. Sometime after the initial bombing, animals and humans alike became horribly mutated, and began to roam the icy, highly irradiated wasteland; eventually finding their way into the metro and terrorizing the residents of the stations that had now become makeshift settlements.

In 2034, the surface has begun to normalize, but only in appearance. The ice has begun to melt, and the sun can occasionally be seen, not to mention the occasional downpour of rain. The mutants still have control, and the air is still very irradiated. War still rages on within the metro between the various factions, and the secret military bunker D6 holds secrets that could save, or destroy, the metro. Following the Battle of D6 and the loss of the bunker, the Spartans re-locate to Polis. Meanwhile, conditions on the surface and in the Metro appear to be deteriorating rapidly.

It's unknown when the winter began, however probably shortly after the Great War of 2013. The cause is not completely known, but on scientific terms it most likely had to do with the polar ice caps or the arctic circle having migrated south. Other theories suggest that dust clouds caused by the nuclear blasts ended up blocking the sun. Either way, it caused freezing conditions in Moscow. It's also unknown whether the winter exists in any other location outside Moscow. The winter diminished any hope for human life above ground, and the only life left on the surface became mutated to cope with the extreme conditions. Again, it is unknown how long it has been occurring for but it's confirmed that by 2034 the snow is either completely melting, or just migrating away from Moscow. This gives at least some hope to metro dwellers, albeit only a slight one.

A nuclear spring, as called by Pavel Morozov, is the result of the snow and ice melting. An occasional sun can be seen through the clouds and rain can be felt for the first time in decades. However, this rain is not pure or harmless, as it's in fact lethally irradiated (possibly acid) rain. It burns the skin and no matter the equipment, death will occur in only a matter of minutes - although a gas mask may delay this process. Warmer weather also causes hostile creatures such as shrimp and nosalis packs to raid human settlements more frequently than before. So either way, when looked at, this nuclear spring is far from a "purified" blessing.

A conversation can be heard in Market Station by the man operating the radio. Men near him discuss an expedition, just after the missiles fell, of a tank crew who had been away from their base in a radiation-shielded tank when the war started; they drove for miles east of Moscow and came across ruined villages where they apparently "found some women" but they eventually ran out of fuel. They decided to stay put, as they stated over the radio that the radiation was nowhere near as high and the "critters were smaller". They settled a small town of tents and apparently managed to bring in a small harvest of healthy crops and two children were born who were "not mutated... much". Radio contact was kept for two years until it suddenly stopped. The fate of the settlers can only be speculated.

Upon climbing the tower, Artyom can vaguely see the silhouettes of more intact buildings on the horizon in any direction. There is also a noticeable border to the devastated portions of the city, suggesting that Moscow was the epicenter of an incredibly large nuclear blast and that it only survived because of its defense grids, and that conditions may be somewhat better on the outskirts of the city.

As revealed in Metro Exodus, many areas outside of Moscow are almost unaffected. Mutants do roam, but in some areas, the air is surprisingly breathable without the need of a gas mask.

The metro systems of Minsk, Kiev, and St. Petersburg are all notably deep below ground. They can be heard being discussed by Moscow metro dwellers in the game in Exhibition and Market, who wonder if people survived there. Other metros such as those in New York, Tokyo, and London are deeper than other subways so a possible hope for humanity is greater there and maybe a new metro game setting as hinted by Dmitry Glukhovsky, author of the novels.

However, it's important to note that Moscow's Metro, while not being the largest in diameter, is the deepest in the whole world. This allowed it to avoid most of the seeping radiation and actual nuclear strikes. So hope of other metros that survived the wars is diminished slightly. Nevertheless, the Universe of Metro 2033 book series confirms that humans have in fact managed to find refuge and survive the war in other parts of the world, including some metro systems of other countries like Poland.

In this sequel, it's revealed that the surface has significantly changed since the annihilation of the Dark Ones. Although exact details and further explanations are scarce, it can easily be noted that the clouds of the nuclear winter are slowly dissipating and every now and then, the sun or blue sky can be seen by those already brave enough. The chill seems to also be quelling down rapidly, with wetlands now beginning to appear in small pockets of the surface. On occasion, it sometimes rains. However, the air quality is still at unsafe levels, still making a gas mask a requirement, though if things continue to go along like this, the surface may be habitable once again.

During the events of Metro Exodus, winter has once again returned to Moscow. Surface conditions appear to be worse than ever, with large fields of ice and snow covering most of the city abd violent, frequent windstorms racking the surface. In the metro system, Hanza appears to be the dominant faction following the Battle of D6. With the Spartans once again stationed in Polis and the Red Line considerably weakened following the events of Metro: Last Light, Hanza seems to exert great influence over all the remaining free metro stations and operating under the orders of the Watchers; Russian government and military officials that have been operating in secret since the end of the Great War. The Fourth Reich, meanwhile, appears to still be a threat, with many metro residents worried about their expansionist goals.

The human population of Moscow seems to be suffering even more than before with food, water, medicine, and other resource rationing at an all time high, amid a outbreak of violent mutant attacks within the metro tunnels. During the events of Metro Exodus, it's revealed that Hanza and the Watchers are operating a network of sophisticated communications jammers, preventing anyone from entering or exiting Moscow. Believing that the country was invaded by enemy forces following the nuclear attacks, these communication jammers were installed to prevent future attacks against Moscow, making the entire city appear dead.

On the surface Hanza operates a small network of armored trains, frequently patrolling the outskirts of Moscow, arresting and summarily executing civilians, including women and children, under the assumption that they are being used as spies by the occupational forces. This information and surface operations were kept incredibly secret, with such high ranking officials in the metro, such as Colonel Miller of the Spartans, being kept in the dark or only fed small bits of information.

Following the events of Metro Exodus, Artyom and the rest of the crew of the Aurora vow to return to Moscow and tell the truth about the outside world, hoping to free the people of the Metro from their hard lives underground.

A ranger firing a Revolver in Metro 2033.

The surface at night as seen in the prologue of Metro 2033.

Ruins of the surface in a Metro 2033 promotional screenshot.

The surface during the day as seen in the level "Alley" of Metro 2033.

Moscow tower blocks as seen from the Ostankino Tower

The city shortly before a nuclear blast. 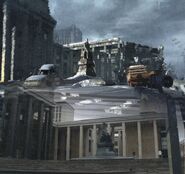 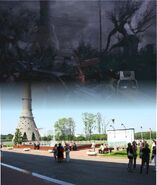 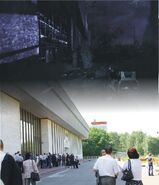 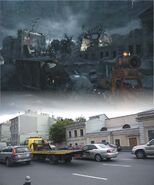