The Night Hunters were a bandit group that operated in the ruins of Vladivostok in the early 2030s.

The Night Hunters were a group of bandits who came to Vladivostok in the early 2030s, intent on claiming control of the ruins and the trade that flowed from the nearby port. Though small in numbers, they made up for this with specialized training and equipment, including their signature Night Vision Goggles. This allowed them to demand tribute from the other local gangs, including ones much larger than themselves, and to eliminate anyone who tried to stand up to them. They eventually managed to control large swaths of the ruins, and established multiple caches and safehouses for their members.

However, despite having claimed the region, their control didn't last. At some point before 2036, the other bandit groups allied against the Night Hunters, and either killed or drove off the remaining members of the gang. Though some managed to survive, they would ultimately die within their secure safehouses, unable to launch an effective counterattack.

Though small in numbers, the Night Hunters utilized advanced equipment to combat larger forces. Their uniform was military-grade, seeming to consist of a grey bulletproof vest, dark pants, and a green combat helmet equipped with night vision goggles, which each member had and used to access the various safehouses and caches the group had set up throughout the ruins. They utilized Sammy rifles and Stallion pistols, presumedly bought from Tom and his army, as well as Ashot shotguns. Each member seems to have utilized slight variations to this equipment, however.

Sam encounters multiple Night Hunter caches and safehouses while exploring Vladivostok. Each is a type of puzzle, requiring the use of night vision goggles to determine the solution. Though no living members are encountered, several deceased members can be found, usually within said caches. 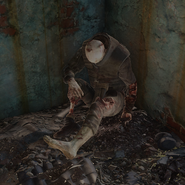 Corpse of one of the Night Hunters found in the Vladivostok pool. 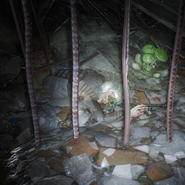 Corpse of another Night Hunter member found underneath the Vladivostok theater. 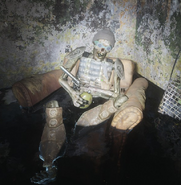 Another member found on the first floor of the apartment block. 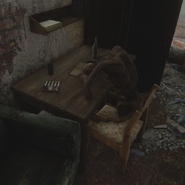 Corpse found on one of the upper floors of the apartment, strangely missing the group's usual gear.
Community content is available under CC-BY-SA unless otherwise noted.
Advertisement