Nikki (also called Snezhana or Снежана in the Russian version of Metro 2033) is a con-artist in Riga, encountered in the level of the same name, in Metro 2033.

Nikki is first encountered when Artyom is drinking vodka with friends, sitting at a table to the right, then walking past them. She can be found later at the end of the black street, in the area where there is a doll on the floor near a fire drum. She only shows up after Artyom talks to Bourbon and answered "I'm not ready" to his question.

When Nikki asks for a bullet, Artyom has the choice to either go with her, or decline her offer. When chosen to go with her, she leads him to her room. She askes him to close his eyes and wait. Artyom does, but opens them just in time to see a big man in front of him, who headbutts him in the face, knocking him unconscious. Artyom finally wakes up with another man standing next to him, chastising him for going with Nikki. He then finds out that Nikki has stolen all of his MGRs.

A transcript of the conversation between Nikki and Artyom. Note that, although the basic phrases are similar, they may differ slightly from player to player:

Nikki: Is that a gun in your pocket? Or are you just happy to see me?

Nikki: Ok, come with me, sweetie.

Nikki: Now close your eyes and wait for a big suprise!

Unknown Man: You dumbass! Everyone knows not to go with Nikki. Her ass really packs a punch, no? Ha-ha-ha! Looks like your pockets were emptied. That's what you get. 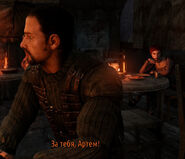 Nikki, seen behind Eugine, eyeing up Artyom when his comrades drink to his heroics on Rizhskaya
Deutsch Русский
Community content is available under CC-BY-SA unless otherwise noted.
Advertisement