Nosalis (Russian: Носач; binomial nomenclature: Talpa Nasuta Miraculosa, meaning "sensory miraculous mole"), the plural of which is: Nosalis and Nosalises, often jokingly referred to in large numbers as snouts, is the catchall term for the most common form of mutant encountered in the Metro.

They are one of the most common enemies encountered Metro 2033, being found on most underground levels. They are also prominent mutants found on both the surface and underground in Metro: Last Light, and they return in Metro Exodus. Simulated nosalises are also one of the two primary enemies in the Tower Pack DLC.

Nosalises are the standard enemy of the Metro video game series. They are fierce predators, extremely territorial, and can easily overwhelm fortified positions in large numbers. Nosalises differ from most other mutant types by the sheer number of variant subspecies that exist under the generalisation of "nosalis". Common between all types however, is a bipedal and humanoid shape with two arms and legs, arched spines, and large round heads that prominently display big noses, gaping jaws, and huge teeth. Their nests are seemingly everywhere in the metro, but the creatures are less frequently seen on the surface. Nosalises seem to be derived from moles, as indicated by their Latin name, as well as their prominent snout and large claws. Like most animal inhabitants of the Metro and surface, they have undergone extreme mutation due to prolonged radioactive exposure. Some nosalis variants may instead be derived from shrews or desmans, both of which were native to Russia before the war.

Nosalises are a diverse species, with many variants. Listed below are the five types found in the game series. 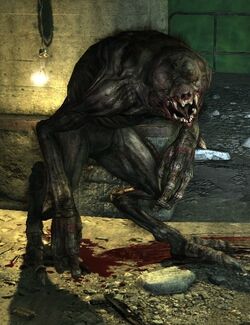 Common nosalises are the most common enemies encountered in Metro 2033, easily distinguished by their pinkish skin tone and lanky arms. This variant’s relative weakness is offset by one factor; they are always encountered in masses. Common nosalises are not hardy creatures and, depending on the difficulty, situation, or weapon, can easily be dealt with via a few good chest-shots or a well-aimed headshot.

Though encountered less often, the common nosalises makes a return in Metro: Last Light. Here the design of the creature has undergone some dramatic changes, most notably to the head. No longer is the head round or pig-like, but instead, angular and with a pronounced jaw-line. The skin of the face is always pulled back from the front, around the maw and nose, revealing a set of jagged and crooked teeth. No longer is the nosalis' body stocky - instead it is compact, almost built triangularly, with more weight and emphasis on the head, shoulders, and upper arms than the torso. 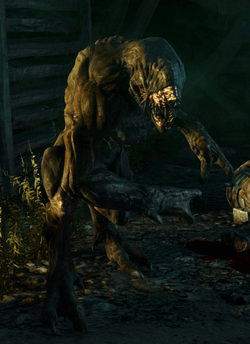 The change to the nosalis in Metro: Last Light is not simply cosmetic either. Nosalises have maintained the ground-speed they had in Metro 2033 and, though sacrificing many of their long-distance leaping attacks, are much more fluid and powerful at close-range. A single nosalis can cause massive damage with high-frequency swipes and bites, which can combo and easily kill Artyom if he is unprepared. Nosalises in Metro: Last Light are still quite lightweight and cannot take much in the way of damage - only able to withstand two shots from a Shambler or a third of a Bastard magazine before dropping on Ranger Hardcore. This weakness is made further by the fact that nosalises will frequently turn away momentarily upon being hit by a powerful single shot, making them prime for another blast. This weakness is not the case in non hardcore modes where a common nosalis can soak up 2-4 shotgun blasts and alternatively ten or more assault rifle bullets on normal difficulty before dying (unless with a successful headshot), the situation is exacerbated by the fact that they hunt in packs of three or more. Sufficiently hard hitting weapons (such as the RPK or any shotgun) will stagger a nosalis and weapons upgraded with drum magazines such as the RPK-74 and Saiga-12 work wonders against them even in large numbers. 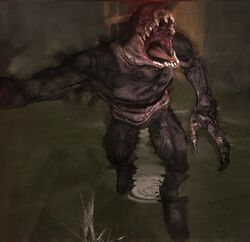 Stronger and deadlier than the common variant, these nosalises are easy to distinguish from the rest because of their darker hair. They take more damage, deal more damage, and are more frequently found in the centre of the metro. One is seen at the end of Chase, but they are not encountered in force until Defense. Massive hordes are found on the levels leading to D6. 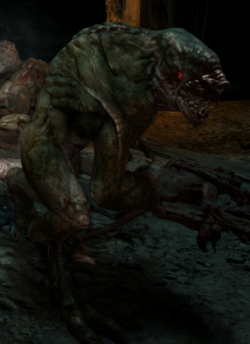 The subtler equivalent to Metro 2033's dark nosalis, the green nosalis is a common variant of Metro: Last Light's common nosalis. Though inflicting the same amount of damage, and moving at an identical rate to that of their standard cousins green nosalises reportedly have about one and a quarter times the health of their counterparts. In the Tower Pack (DLC) for Metro: Last Light, green nosalises are quite notably different as they emit a seemingly radioactive-green fog. These variants in the Tower Pack have a definite health boost in comparison to the standards of the arena.

Green nosalis yet again appears in Metro 2033 Redux version, where they seem to have a strength and lethality almost similar to the dark nosalis cousins encountered through the course of the game. Much like the one from the Tower Pack DLC for Metro: Last Light, these nosalises seems to emit a similar radioactive-green fog which can blurs the vision of Artyom and deal damage upon contact with them. They appear to be much tougher than the other nosalis variants, able to take even more damage than a dark nosalis and can be worthy opponents to Artyom himself. 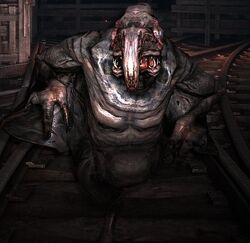 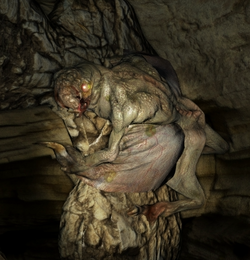 One of the rarer subtypes, they are only fought directly during Depot and Defense. It is never revealed within the game itself, but the sound files of Metro 2033 indicate that this variant of nosalis is the female of the species. This can be seen more clearly in Metro: Last Light, where they have numerous teats visible along their bellies, similar to those of the nosalis rhino. Winged nosalises are typified by pronounced noses, with a smaller mouth than other nosalises, as well as vestigial membranes of skin under their arms hinting at wings. They also have a split lower jaw, irritated red flesh surrounding the eyes, and heavily clawed feet.

It is unknown how a winged nosalis makes the transformation into the alpha female rhino. Looking at the differences, it does seem that this process would take quite some time to accomplish.

These versions are faster than normal nosalises, and have the ability to jump much further. They also have the ability to unleash a powerful sonic attack which sends a wave of distortion that inflicts damage, causes dizziness and deafness, and can stun opponents for short periods of time. Their strengths, however, are offset by poor endurance; they take less ammo to bring down than even a common nosalis.

The winged nosalis appears again in Metro: Last Light, in the catacombs underneath the swamp church, and on the bridge. Aside from a less pronounced head and new sonic attack animation, these nosalises remain greatly unchanged, still producing their signature move, and still moderately vulnerable to gunfire. They also appear in numerous levels in the Tower Pack, wherein they pose a significant threat to players wishing to combat nosalises while backpedaling. While dealing with them, always slay them at range that their sonic attack is useless against the player.

In Metro 2033 Redux, winged nosalises behave differently in the Defense level – rather than move forward in a straight line towards the defenders and being minced up, they will stick to walls and launch sonic attacks, often from beyond the reach of Artyom's flashlight. 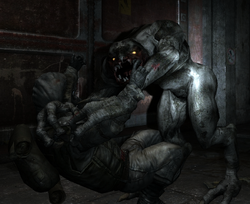 A rare variant of the common nosalis only appears in the level Dungeon and is most notable for being the kind that killed Boris on the way to D6. They are identified by their pale white fur tone, luminescent eyes, and a massive jaw span. 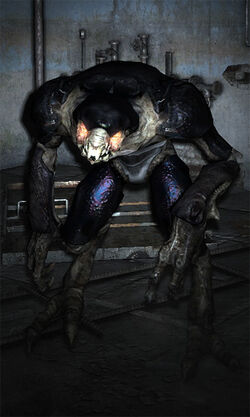 The most powerful - and rarest - of all nosalis strains. The strongest of the family, plated nosalises only appear in the vicinity of D6. They retain the agility of their weaker brethren while doing much more damage and have armor plating which makes them much harder to bring down. Making matters worse, they can see perfectly in total darkness. Their eyes adapted for the dark, are easily blinded; shining the flashlight directly on a plated nosalis will cause it to back away unless Artyom is within striking distance. Artyom will only encounter two of these, both on the Caves level and both can be completely evaded.

This type of nosalis does not appear in the Redux version and was presumably replaced by the male and female variants of the spiderbugs. 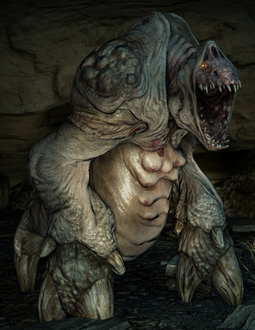 The nosalis rhino is a large nosalis leader encountered in Metro: Last Light, and is the equivalent to a brood mother, or alpha female. The rhino derives its name from method of attacks the beast performs - which are frequently in a linear charge fashion, like that of a wild boar or rhino.

It can be hypothesized that the Rhinos are a later stage of the winged nosalis, seeing as both are the female variants of the Nosalis and that they both share some similar features, such as the nine teats on their abdomens. 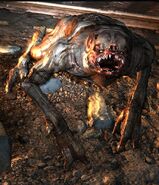 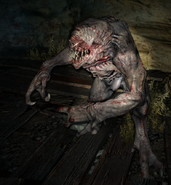 The same kind of nosalis in Metro: Last Light 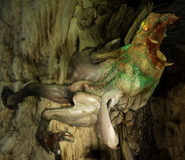 The sonic blast from a winged nosalis as in Metro: Last Light

A gameplay screenshot of a nosalis attacking

As seen in the Metro: Last Light demo

A rhino variant from the Metro: Last Light demo