A last stage of development of a Winged Nosalis

The Nosalis Rhino (frequently shortened to just Rhino and known also as Big Momma) is a massive nosalis leader battled in Metro: Last Light, the equivalent to a brood mother or alpha female.

The Rhino derives its name from its method of attack - frequently a linear charge fashion, like that of a wild boar or rhino. The Rhino is a monster wrapped in legend. So much so that it appears that even the Rangers of Sparta hold it in great reverence, most likely falsely fearing it as a contributor to the supernatural occurrences felt underground in the catacombs.

When attacking, the rhino may damage enemies and allies alike if they stand in its way, becoming exploitable, since the player can use this to his advantage by maneuvering around the battlefield. The beast is vulnerable from the back and the head.

The Rhino is encountered at the end of the Undercity level and serves as a two-part bossfight. In both areas, the Rhino can be defeated in two different ways. Firstly, and most conventionally, the Rhino can be killed by simply taking enough damage, as, despite its size, concentrated gunfire to its weak points will down it relatively quickly. Dependent on the difficulty and the amount of ammunition the player has at the time, however, this strategy is best avoided as the second strategy - having the Rhino destroy both area's stone supports by running into them - requires next to no bullets to successfully perform. Despite its introduction, the Rhino is an easy opponent to deal with if methods are right, but that doesn't mean Rhino can be underestimated; the damage it deals by charging can be fatal on higher difficulties, also it will have weaker Nosalis supporting it. However, the beast's movement is predictable, if Artyom can keep a distance, and have an eye on Rhino's whereabout, he can easily keep out of harm's way.

After taking some damage, or destroying all pillars in the first area, the Rhino will knock down a wall and retreat. When Artyom follows it into the second area, it will be helped by two regular nosalises. This support acts mostly defensively - with one nosalis hopping onto the Rhino's back that must be dealt with before the back can be shot at again. Though the first area can be completed without firing a shot, the second area must be completed by damaging the Rhino after she has destroyed all of the support.

It's a good strategy to use claymore mines against the Rhino, since they deal tremendous damage and are rather easy to use against an enemy that keeps charging the player. On Ranger Basic and Ranger Hardcore, the second part of the fight can be ended with a single claymore mine.

As seen in early gameplay footage.

Concept art of the Rhino.

The Nosalis Rhino in the full game. 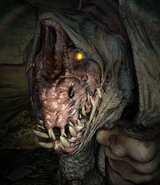 Rhino on the bridge
Community content is available under CC-BY-SA unless otherwise noted.
Advertisement