Novosibirsk Metro (Russian: Новосибирский метрополитен) is a rapid transit system that runs underneath Russia's third largest city, Novosibirsk, and the only Russian metro system located eastwards of the Ural mountains. It is a key location in the final part of Metro Exodus, its first DLC (The Two Colonels), and it also appears in some Universe of Metro 2033 books.

Most of the Metro tunnels in Novosibirsk are fairly shallow, especially when compared to metro systems in Moscow and St. Petersburg. Thus, its level of radiation protection is not nearly as high as that of the metro systems in the two aforementioned cities. This plays an important role during the events of Metro Exodus and it ultimately leads to the demise of its community of survivors.

While the Moscow Metro were divided into several factions, maintaining a harsh balance of fighting each other over resources and space, the Novosibirsk Metro appeared to base itself on unity, surviving together. This however, proved unsustainable in the long run.

Novosibirsk Metro was controlled by OSKOM, an organization which evolved from a local military unit after the Great War. OSKOM set up their HQ at Sibirskaya-Krasny Prospekt, the only transfer station in the Metro where the two lines cross each other. Despite being fairly low in numbers, they were able to control the local population of people, because they were responsible for the distribution of Radioprotector - a military anti-radiation drug, which was necessary for survival of every single Novosibirsk inhabitant, as the city was struck by a cobalt bomb which lead to radiation levels so high that shallow metro tunnels offered only partial and inadequate protection.

A series of critical events emerged in the year 2035, when the supplies of Radioprotector started to run out. OSKOM started halving people's rations of the drug and confiscating any excess supplies they discovered, even those obtained legally, while planning to evacuate the city. What the survivors didn't know is, that only the highest OSKOM members were to evacuate, leaving most of the people behind. This was partially because the remaining supplies of Radioprotector weren't big enough to evacuate everybody, but also because OSKOM knew they would lose their invincible authority outside Novosibirsk where people's survival wouldn't be dependent on the drug.

The situation eventually became critical, leading to massive riots. OSKOM sent Colonel Khlebnikov to stop the rioters while the evacuation process began. Khlebnikov and his men barely stopped the survivors from reaching Sibirskaya, but most of them were subsequently killed by a gas attack. The attack was initiated by General Vinogradov, which made Khlebnikov furious as Vinogradov was his close friend, but the two discovered that OSKOM command is evacuating without them, betraying them both. Vinogradov ordered his remaining men to destroy the train with OSKOM officials and committed suicide. This left Khlebnikov and his son Kirill the only known survivors in the Novosibirsk metro.

Two months later, Klebnikov visited the local satellite control center to find maps of radiation levels, hoping to find a clean area where he and Kirill could settle down. He retrieved the map he needed but didn't make it out alive, passing away due to extreme radiation and the fact that his last Radioprotector dose was destroyed by a Blind One.

A month later, Aurora arrived to Novosibirsk because the crew needed to find a cure for Anna, who was in a critical condition due to poisonous gas exposure. Artyom managed to find the cure while Miller collected the map in the satellite control center, after Kirill told him about his father's mission. Aurora then left the city with Kirill, so the Novosibirsk metro was completely abandoned by humans, leaving Nosalises, Worms, and the Blind Ones the only known remaining life forms in the city.

Novosibirsk and its Metro appears in the following Universe of Metro 2033 novels: 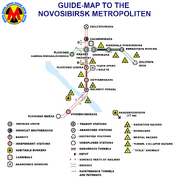 Map of the Novosibirsk Metro in 2033. 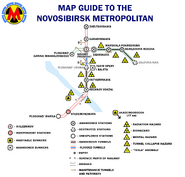 Map of the Novosibirsk Metro in Metro Exodus (2035)