Tank has other uses. Please see Tank (Disambiguation) for other meanings.

The Panzer is a heavily armored Nazi railcar used for advanced combat. In the game, it appears in the levels "Front Line" and "Trolley Combat". Feared even by the Rangers, it's among the deadliest weapons used in the Metro.

The Panzer is an armored trolley with a fully-rotating turret, effectively making it a metro-made tank on rails. Unlike the Red Line Tank, its crew compartment is fully enclosed, so the crew is protected by Panzer's armor at all times, even when firing the main gun and reloading. On the other hand, the visibility might be fairly limited, as there aren't any apparent optical devices on the vehicle. So the crew probably has to rely on simple periscopes and thin slits in its armor, similar to real-life WWII tanks this vehicle was clearly inspired by. 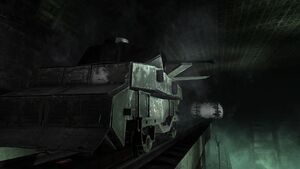 During the game, Artyom comes across two different Panzer tanks. The first is found in the middle of the Front Line bridge, but it has been destroyed by Communist soldiers and has the dead crew around it. Unfortunately, the second one he comes across is fully functional and is after Artyom, along with his companion Pavel. It appears in the level "Trolley Combat", halfway through after shooting through the wooden roadblock. It appears out of an opposite tunnel and chases the pair until reaching an abandoned tunnel where it's destroyed by Artyom.

There are actually two different variants of the Panzer. The first is the variant seen in game mounted with an anti-tank cannon. There is also a second variant that has the cannon replaced with a heavy machine gun which can only be seen in the launch trailer for Metro 2033 as well as in the PC Benchmark for Metro 2033.

Although it cannot be destroyed by machine gun fire directly, Artyom has to shoot the second set of bridge supports to collapse the bridge and bring an end to the tank by allowing it to plunge into the waste below the rails, in turn getting the Tank Buster achievement. The Panzer is easy to defeat as for most of the confrontation is it preoccupied by trying to clear its path on the rail, the only way it can kill Artyom is if the player takes too long to shoot the support pillars - this can be avoided by not shooting until the tank is either over the weakened supports or coming up to them as firing before. This is a waste of time and can overheat the gun, which takes a while to cool down. 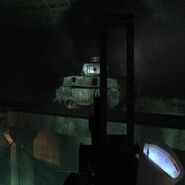 The Panzer in the level "Trolley Combat".

Side view of the Panzer
Deutsch Русский
Community content is available under CC-BY-SA unless otherwise noted.
Advertisement