Pavel has other uses. Please see Pavel (Disambiguation) for other meanings.

Major of the Red Line

Major Pavel Igorevich Morozov (Russian: Павел Игоревич Морозов) is a Red Line soldier and the secondary antagonist in Metro: Last Light. He is also a playable character in the Chronicles Pack DLC, where his mission is to go back to the Red Line after his quarrel with Artyom in Venice.

Pavel first meets Artyom inside the Reich, both being captured in the botanical gardens by Reich stalkers. One of Pavel's comrades refuses to talk and is subsequently executed on the spot. Pavel hastily bargains with the officer, saying that he is willing to talk but not while Artyom is present. The officer then turns to question Artyom, and Pavel uses the opportunity to attack the other guard. Artyom prevents the officer from shooting Pavel, who kills the officer with a knife to the stomach. Pavel and Artyom then escape the Nazi concentration camp, hiding in the crowd during the Führer's speech and escaping to an outpost after Pavel fires a shot in the middle of the crowd. Pavel is, again, captured at the outpost and sentenced to hang, though Artyom narrowly saves Pavel from the noose and the two escape to a nearby spider-infested tunnel. The two battle their way through the tunnels and make for the surface to get to Theatre Station.

Pavel and Artyom stumble across a Ranger outpost where they take a couple of gas masks for the trek across the surface. On the surface they have to go through the wreckage of Flight 76715 to get to the Metro entrance, where they both experience a vision of the plane crashing in Moscow during the nuclear strike in 2013. After awakening from the vision, Artyom finds Pavel sitting against a wall twisting and without his gas mask. After saving Pavel by putting his mask on, and as they leave the plane, the two fight their way past a demon and a horde of watchmen before finally making it to the tunnel entrance. Pavel saves Artyom, who has been pinned to the ground by a watchman and hauls him through the airlock before a pair of flamethrower wielding soldiers burn the watchmen.

After entering the Theater via the airlock, Pavel explains to Artyom how he will take Artyom to Polis via Revolution Square. After leaving Artyom to collect supplies and look around the theatre, Pavel takes Artyom to the burlesque ball. After waving some documents and gaining entrance to the burlesque ball, Pavel gives Artyom the option to watch the show or go to the back. From here, Pavel leads Artyom to a bar where Pavel has ordered a round of drinks. Unbeknownst to Artyom, Pavel has laced his drink. Before he passes out he learns that Pavel is a high ranking officer of the Red Line, specifically a major.

Upon coming to his senses, Artyom wakes up in the heart of the Red Line, with Pavel holding Artyom hostage and prepared to hand Artyom to General Korbut. Pavel learns that comrade Moskvin is also present, and seems surprised. Regardless, Pavel takes Artyom into the station, saying that Artyom should join the Red Line. After passing Artyom to Korbut for interrogation, Pavel leaves to receive his new orders.

After Artyom is interrogated, and returns to his senses, he overhears Pavel's briefing from General Korbut about being sent to Venice. After receiving help from Leonid he manages to escape Revolution Square. Artyom traverses abandoned tunnels infested with spiderbugs with the help of Andrew the Blacksmith's railcar, Regina. Artyom is picked up by a fisherman, Fedor, who can take him to Venice via riverboat. The pair fight shrimp that Pavel and his men may or may not have already agitated. Upon reaching the strip club in the floating station of Venice, Artyom finds Pavel talking to some of the strippers before entering one of the rooms.

Artyom listens in on the conversation, but his cover is almost blown by one of the strippers. Regardless, Artyom learns enough that Pavel heading to the warehouse. Artyom heads to the warehouse to confront Pavel. After making his way through the Venice criminals, Artyom is held at gunpoint by Pavel, who is ready to kill him. Artyom acts quickly, rushing Pavel with the knife he gave him during their escape from the Reich. Pavel admits he knows the locations of the Dark One Artyom is searching for, and even offers to take Artyom to the Oktyabrskaya free of tricks. However, Simon, a local law enforcer, busts down a door, giving Pavel enough time to throw Artyom at Simon and escape.

Much later, after Artyom sneaks into an area where the Reds have tested the bioweapon, and freed the Dark One, He learns from Lesnitsky's memories that Pavel was taking orders from General Korbut and is entrusted with a special mission in Red Square. With this information, Artyom heads to Red Square to confront and stop Pavel.

After crossing a ghost city, Artyom is surrounded by Pavel and his troops. Pavel congratulates Artyom for making it this far, and orders his men to open fire. With the help of the Dark One, Artyom survives the encounter, and enters a grisly firefight with Pavel. Wounding Pavel, Artyom enters his memories. From these memories, Artyom learns that Pavel was ordered by General Korbut to deliver the virus to D6, and wait for an order to release it. Pavel is then pulled into the graveyard of Damned Souls. Artyom is given the choice to either save Pavel from the damned souls or leave him to his fate. If Pavel is saved, Artyom places a filter on Pavel's mask, and he will gain positive moral points. The watching Dark One comments that it now knows forgiveness, and that Pavel will live. If Pavel is abandoned, he will die.

It would seem that Pavel did indeed see Artyom as a friend, but believed in his loyalty to the Red Line more than his relationship with Artyom. The Dark One states in the fight at Red Square, however, that Pavel is sad to have to fight Artyom, even when he taunts Artyom during the battle.

The Chronicles Pack level, "Pavel", explains what happened to Pavel after he escaped from Artyom and Simon in Venice. It reveals that Pavel was captured by the leader of the bandits, who tied him up and tortured him. Preparing to give Pavel an injection that would force him to power a generator till he drops, the bandit was jumped by Pavel, who injected him instead, throwing his body down a sewer. Retrieving a flashlight and a knife, Pavel escaped the bandits, emptying a number of their safes along the way, until he made it to another part of Venice, where the bandits had not reached.

Pavel met up with a contact in the Red Line, Yanek, posing as a homeless man, who told him that a cart was waiting to take him to the Red Line. Escaping Venice for good, Pavel made it back to Korbut, who immediately dispatched him to Red Square, as in the main campaign.

Pavel hiding from bandits, armed with a revolver carbine 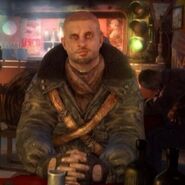 Pavel at the bar in Venice

Pavel escapes the grasp of the Nazi troops. 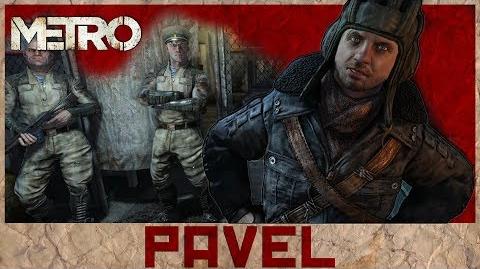