Pavel has other uses. Please see Pavel (Disambiguation) for other meanings.

The Teacher has other uses. Please see The Teacher (Disambiguation) for other meanings.

Primary protagonist of Szmidt's trilogy (The Abyss, The Tower)

The Teacher (Polish: Nauczyciel), his real name being Paweł Remer, is a 47 year old "Remembering One" - one of the increasingly fewer remaining adults born long before the war and valued for their knowledge. He is the protagonist of novels The Abyss and The Tower.

Just before the bombs started falling, Paweł worked as a security guard for an important official. Thanks to his close proximity to a person of authority and their family, he learned about the incoming nuclear holocaust much sooner than most of the Polish population. This allowed him to find shelter relatively quick and save himself from the devastation that ravaged Wrocław and most of its populace.

As society degenerated into barbarism in the following years, Remer joined a brutal gang that held most of the territory in the sewers underneath the western section of the city (this is where his face tattoo - which resembles a scorpion - originates from). He continued to be an important persona in the battles between rivaling factions until his own group faced defeat. Believed to be dead, he fled eastwards with his son "Niemota".

Years passed and Paweł became an important mentor in one of the "free enclaves" and adviser to its leader, securing a safe position for himself and his disabled son, including privileges that excluded his pupil from most of the hard labour involved in maintaining a post-apocalyptic community. His role as an instructor and father figure of kids that would grow to venture onto the surface in search of supplies earned him his nickname.

However, in the year 2033, not long after the old leader of the enclave died and his only heir took over (an inexperienced young man), a tragic turn of events forced Remer and his son to flee their only home. A new mission arose in their lives, and the two met along the way a cheeky 14 year old girl called "Iskra" (Spark). The Teacher, Niemota, and Iskra continued to travel together. 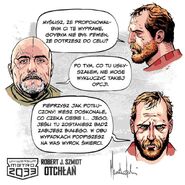 The Teacher and Stannis 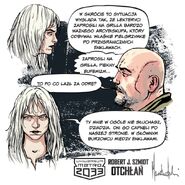 Iskra and Remer in colour