View source
watch 02:56
Raise a Floppa - The Loop
Do you like this video?
Play Sound

Key location of various novels from the Universe of Metro 2033 series.

Poland (Polish: Polska), its official name used in diplomacy and legal documents being the Polish Republic (Polish: Rzeczpospolita Polska), is a Slavic country in Eastern Europe and a major location of the Metro Series - primarily the Universe of Metro 2033 books. It is bordered by Germany to the west; Czechia and Slovakia to the south; Ukraine and Belarus to the east; and the Baltic Sea, Kaliningrad Oblast (a Russian exclave), and Lithuania to the north. The Vistula is Poland's longest river and an important national symbol.

Poland's larger cities that have definitely harboured significant numbers of survivors after the war are: Warsaw, Kraków, Wrocław, Szczecin, Łódź, and Katowice. Pockets of human remnants have also persevered in parts of the countryside and smaller towns, but these groups tend to be very small and poorly equipped.

Bombs dropped on Poland's capital, Warsaw, were numerous but fairly small; all were detonated in the troposphere, resulting in a minimal shockwave with a maximal diffusion field of the so-called "active material". For the city this meant relatively little physical damage to its structures, but huge amounts of radiation. Moreover, many of the weapons utilised were of a bio-chemical nature, primarily affecting organic matter. In a matter of hours, animals and people died in immense torment as they turned into a fetid, muddy slush. Vegetation blackened and crumbled into dust, wood was transformed into a spongy toxic mass.

As a consequence of the atomic warfare, nuclear winter began to reign over Warsaw. Whenever the weather did warm up a little, anyone caught in the acid rain would experience serious injuries that burned all the way, through skin and flesh, down to the bone. The nuclear winter continued to cover the city's areas with ice and ashen snow even in the year 2033, with temperatures over a dozen degrees Celsius below zero. This in combination with the effect of the organic bombs led to a shortage of materials to burn for heating the hideouts of those few who manged to stay alive.

Most of the Warsaw Metro's stations have endured nuclear bombardment, thanks to which Varsovians can continue to fight for survival beneath the surface of the planet in the year 2033. In reality, a significant portion of the M1 metro line in Warsaw was built to serve their secondary function as fallout shelters.

Despite Radom having a military airport and firearms factory, nuclear weaponry was not used on this city in east-central Poland... but the harsh winter, acid rain, toxic clouds, and such environmental consequences of World War III have brought Radom to ruin regardless. A family of survivors build a hot air balloon and attempt to fly to Africa - from above they see the devastated villages along the southern side of the Western Carpathians; Budapest, the once magnificent capital of Hungary, is nowhere to be seen and the enormous Lake Balaton has dried up completely.

Ostrołęka is in the northeast of the country; over 160 people survived in its mausoleum, but their existence has become threatened by the brutally dangerous cult of "Samaritans", hailing from the undergrounds of the Saint Francis Church.

Up north in the Gdańsk Bay people live on a set of connected boats, while the inhabitants of Gdynia's military shelters try to reach other survivors by radio from the city's abandoned torpedo station.

Wrocław is a sizeable city in the southwestern part of Poland. Tens of thousands of people there lived through the Attack to see another day by hiding in the abundance of Wrocław's sewage system, some of which dates back to the 19th century. Unfortunately, the world's climate was disrupted by nuclear warfare, bringing onto the city a 2 year long nuclear winter. Even more of the survivors were gradually embraced by death thanks to the radiation, famines, and epidemics that followed in the first few years of post-apocalyptic adversity.

20 years later, Wrocław is being consumed by a growing mutated jungle that breeds dangerous new species of wildlife, from the terrifying flying manta ray-like "skrzydłocz" to the hulking otherworldly "stąpacz", all complemented by just as fatal vegetation. Leftover traces of humanity have banded into enclaves - clannish societies inhabiting Wrocław's underground tunnels; the cannibalistic "Lecterites" are advancing onto the city from its eastern suburbs, western neighbourhoods are dominated by violent factions of former ultras and dresiarz gangs, whereas the southern sewers are populated by seemingly the most civilised groups.

In the northwest of Poland, the existence of a rigorously organised underground society of survivors in Szczecin is threatened by the spread of strange flora from an ominous xylem-like structure. Meanwhile, a mutated boy with unique abilities is hailed as a messiah in another district. The Republic of Jasne Błonia makes up another small fraction of Szczecin's remaining human population, home to the renowned Niebuszewo Crew of experienced stalkers.

On the right bank of the Oder (Polish: Odra) river, scraps of Szczecin's humanity have organised themselves into pagan strongholds that have returned to the so-called Native Faith. Each gród is maintained in the patriarchal ways of the old Slavic tribes, while the pre-war Catholic churches have been converted into Native Faith temples - the main deity of most tribes being Światowit. The apocalypse is explained as being caused by the Slavs turning away from their original religion and blindly believing in Christianity. Names of mutants in Szczecin are derived from Slavonic folklore, such as: bies/diabeł, rusałka, utopiec/topielec, strzyga/striga, and so on.

A network of bunkers under Oleśnica, in the southwestern part of the country, harbours a community of humans who connected their shelters together using the ZNTK (Rail Rolling Stock Repair Workshops) as the basis - some of which were constructed back when the town was under Nazi German control. Some survivors exist on the surface also, but they are less organised and seemingly smaller in numbers.

The relatively small town of Sława, or to be more precise: its lake, is the home of several people who live onboard the three submarines stationed there.

During World War III, the enemy dropped 2 nuclear bombs near the once glorious city of Kraków. Less than 20% of Kraków's pre-war population lived through the explosions. Even fewer have managed to endure the following conflagrations, as well as the lethally long winter that followed. By 2033, almost 2 decades after the worldwide conflict ravaged the planet, the surface of the Earth remains uninhabitable. The snow has melted years ago, only to reveal immense amounts of radioactive ash. However, thanks to the expansive network of underground fallout shelters built beneath Nowa Huta, a portion of the district's former citizens lived on... but humanity is deteriorating.

In Zwonowice, in the Silesian region, several villagers continue to live a miserable existence in cellars underneath a destroyed building; to their undoing, the man they selected as their leader is unaware of his own gradual descent into vicious madness.

Częstochowa continues to be highly irradiated after the war, but hundreds of souls persist in old tunnels beneath the Jasna Góra Monastery. Under the influence of a Catholic priest, the subterranean community degenerates into an autocracy, but dissent grows within.

People have survived in old mines as well as the grim tunnels of Project Riese. Elsewhere in the southern part of Poland, a religious cult has endured within Giewont, whereas Zabrze's former mine houses a society that preforms a "lottery" every time a child is born to dictate who will leave to die on the surface.

Katowice used to be one of the most industrialised cities of the nation, so it comes as no surprise that Silesian miners and their families hid in the "Dół" mine system when the bombs fell. On the surface there is a strict, order-like society situated within the city's library, which controls and treats its female denizens like "incubators". Contact between the two communities is limited (as the miners prefer an isolationist approach), but mostly peaceful.

Almost 100 people form a well-armed faction in a neighbourhood in Tychy, but they eventually retreat underground.

Several humans continue to live in the wild near the Żar mountain, in isolation from the rest of the world.

In Łódź only 632 people managed to live through the nuclear war by seeking refuge in railway tunnels and sewers underneath the city (Łódź does not have a "full" metro system). Struggling to cope with the end of the world, the community of survivors began to degrade and split into two unfriendly groups: one a cult led by two pre-war Catholic priests, the other a regime of atheists determined to remain "rational" in the face of recent events. Differences between the two factions eventually grow into a full-scale conflict between them.

Except for communities of human survivors of varying sizes, Poland remains home to plenty of wildlife - some of it mutated, some of it largely untouched by the nuclear fallout from the Third World War. Much of the fauna and flora of post-apocalyptic Poland is the same as that of its Russian neighbour, such as wolves, deer, ravens, hares, and glowing fungi, but some of the new lifeforms seem to be exclusive to Poland's radioactive ecosystem - like the primitively intelligent błotniak that lives in the Vistula near Kraków, as well as several other parts of the Polish lands. Kraków is the breeding ground of much mutated flora, including violent and carnivorous plants that did not exist before 2013.

Wrocław is covered by a growing mutated jungle that breeds dangerous new species of wildlife, from the terrifying flying manta ray-like "skrzydłocz" to the hulking otherworldly "stąpacz", all complemented by just as fatal vegetation. In Warsaw, the nuclear winter may have killed off all the plantlife, but it has bred countless species of grey-skinned, man-eating predators: rabbit-sized cockroaches, Nosalis-esque hordes, a strange cross between bear and dog, gargantuan and disgusting insects, as well as even more unsettling humanoid creatures.

Where possible, Poles who managed to find refuge from the war tried to take with themselves their livestock (like pigs) as well as domesticated dogs. Vodka - originally invented in Poland and popularised throughout Russia, Ukraine, and the rest of Eastern Europe - continues to be the country's national drink after World War III, albeit it is not as easy to find as it used to be. One new beverage that has appeared as a result of the widespread shortage of supplies and reduction in arable land is spirit distilled from mushrooms.

Anomalies and other supernatural phenomena have also been spotted by stalkers in Poland. 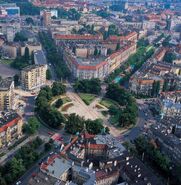