Polis has other uses. Please see Polis (Disambiguation) for other meanings.

Polis (Russian: Полис) is a collection of stations, located at the heart of the Metro, which is situated below the Moscow State Library and General Staff of the Armed Forces of the Russian Federation building. It's situated very close to the Kremlin.

Polis is formed by the Arbatskaya, Aleksandrovskiy Sad, Biblioteka Lenina, and Borovitskaya stations. Above ground is the Moscow State Library, formally known as Lenin Library. Throughout the Metro, Polis is known as a station with wealth and power. The platforms which encompass Polis seem to have been taken up by various machinery, with near building-like structures taking the place of housing. In the novel, there is a caste system consisting of the Shudra, who are the servants, the Vashiya, a group of dedicated Polis merchants, Kshatriya, the former Russian Army, special forces, or Government agents who make up the defense force, and finally Brahmins, who are the pre-war scientists, teachers, and other important keepers of knowledge.

Every individual in Polis decide which caste they want to enter when they turn 18. The four stations denominate the four groups and separate them. The Brahmin are known to pay great amounts for Stalkers to go to the Library to collect books.

In the game Metro 2033, the hierarchy is not set into groups but instead one group. It's known as the Polis Council. Not much is known about the group apart from the fact that they either genuinely don't care much for VDNKh and the Dark Ones or are simply incapable of sparing resources to counter this threat.

Polis is a unique city-state of the Metro. Only there do the keepers of old pre-war knowledge remain in substantial quantity. All scientific knowledge became useless for other Metro states, as they slowly descended into the abyss of chaos and ignorance. Scientists from everywhere, where their skills were useless, came to Polis. Only there could one meet elderly professors from pre-war universities, the last artists, artisans, musicians, poets, physicists, chemists, biologists, and mathematicians. All those who kept the knowledge achieved by thousands of years of human history, that may or will be lost forever once they pass away. The station is also considered to be the birth place of the Rangers of Order. 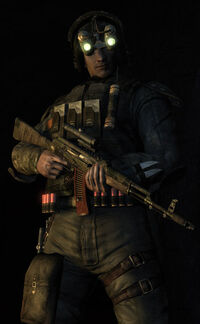 Because Polis is seen by many as the last hope for humanity, the last bastion, and the last think-tank, it has a sizable defensive force, the details of which are modified from medium to medium.

In the game, Polis is protected by the Kshatriya which is an umbrella term for Polis' Military Branches. It includes a very large Ranger force. There are at least eight Rangers at the first entrance. The Kshatriya also includes ordinary Town Guards and Militia. The protection is around the clock, and they use the most advanced equipment for their guardsmen to ensure the safety of this settlement. Also, deployed at the entrance to Polis is a large concrete bunker reinforced with metal plates. At the front of this bunker there is a small pillbox that retracts and erects out of the ground. Behind that there is a large spherical turret closely resembling the AK130 Naval cannon the Soviets have on their modern ships. This has a cannon inside, most likely a 73 mm 2A28 Grom semi-automatic gun salvged from a destroyed BMP1. Below this there are Quad-DShK machine guns, two mounted on each side above each other in a metal encasement, with only the gun barrels sticking out. Towards the far end of the bunker there is a small entrance with view ports on each side of it.

Similarly in the novel, Polis boasts a small, but professional military corps made up of the former FSB officers and military leadership, whose buildings were right above the stations of Polis when the war broke out.

Polis is situated right under the very center of the city that was above it some time before. Nearby to Polis looms the gigantic Moscow State Library, the biggest information storage of the old world. After the war, it was called the "Great Library" and became a religious and sacred place for Polis dwellers. The rest of Metro, with respect, calls it "Library". Only Polis of all the Metro powers can afford sending stalkers for books and other pre-war items that is considered "old world technology". Only there, is knowledge still valued highly enough to risk ones life to acquire it. Polis hosts smaller libraries, and the people there can afford "flats" - trash-built homes in between the station pylons or columns. The rest of the Metro, aside from a few Hansa citizens, live in tents, or in even worse conditions. This may seem irrational, but because it was the last science center, it was never attacked, threatened, or devastated, but rather traded with and meticulously guarded. All Metro powers were ready to defend it, were it attacked. Even the war between the Hansa and the Red Line did not touch Polis.

Plaques with names of four stations that comprise Polis

The Fourth Reich and the Red line meet at Polis.