The Preved (Russian: Превед) is a Metro-made anti-materiel rifle that appears in Metro: Last Light. It's known for having the highest single-shot damage capacity of any weapon in the game (it is capable of defeating the Bear in as few as five shots on the easier difficulties), as well as being one of only three true sniper rifles in the game - the others being the Valve and the Clapper.

The Preved is a high-powered, bolt-action rifle which appears in Metro: Last Light. The Preved fires the 12.7x108mm round and has the highest damage per bullet of any firearm in the game. It looks closely based on the WWII-era PTRD and its semi-auto cousin, PTRS-41 anti-tank rifle.

In its basic configuration it only holds one round but it can be enhance by customising it with a 5-round detachable box magazine, as well as a 4x scope, and a flash suppressor/muzzle brake.

The Preved is able to penetrate most forms of cover, retaining more than enough power to kill an enemy from behind. It can also drop enemies in heavy armour with a single hit. Its extreme damage output is useful in taking down large tough mutants such as demons and can even be used against the bear, though its extremely slow rate of fire means one will have to be accurate. Although it could be effective, using the rifle against agile enemies such as watchmen is not recommended. This weapon has unmatched firepower, but even with the magazine attachment installed, the cycle between each round is slow.

There are very few places in the game where you can successfully snipe, or any where stealth would not be more effective. Ammunition is also rare; however, as of Redux, it is possible to purchase ammo directly from merchants available later in the game; in the older version of Last Light, purchasing 12.7x108mm rounds is not possible. Additionally, the fact that the weapon cannot be silenced means it is often less effective than a silenced Kalash, VSV, or Tikhar. One of the few good instances to use this weapon is during the final battle for D6, where its anti-materiel capabilities are used in taking out the Tank, though it performs well afterwards in taking out the armored Flamethrower trooper and his riot-shielded guard. Or just enemy soldier from a distance, which it proves to be better than assault rifles.

The Preved has four attachments available to it. Its upgrade pattern is similar to that of the Valve, but with less Optics to choose from. Equipping extended magazine turns the Preved from a single-shot weapon into a bolt-action rifle with 5 rounds in the magazine. 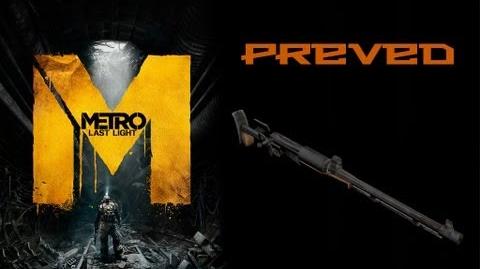 In-game Preved, as seen from the first person perspective in Metro: Last Light

The real-life PTRD (top) and PTRS-41 (bottom), which probably served as an inspiration for the Preved