Kalashnikov RPK-74 (Ruchnoy Pulemyot Kalashnikova or Kalashnikov hand-held machinegun), known in-game simply as the RPK, is a squad automatic weapon version of the baseline AK-74. This classic pre-war machine gun has a great range and is very accurate, while at the same time being able to handle long bursts. The first one can be found in D6 at the shooting range, but becomes unavailable in shops until Artyom reaches Venice. It has a large magazine capable of holding 45 rounds (100 with extended magazines) and its accuracy can be compared to an improved Kalash, albeit with a slightly lower rate of fire.

The RPK is a solid choice if exploring the surface or going against mutants that need some serious firepower to take down. The addition of a drum magazine, a reflex sight and the laser sight makes this a well balanced and accurate firearm that will serve well in tough firefights against soldiers and mutants, allowing for long bursts of accurate firepower when needed.

One of the gun's downsides, being an accurate weapon with a large ammo capacity, is that its rate of fire is slower than that of other automatic weapons such as the Kalash, Bastard, or the Kalash 2012, meaning Artyom can be easily outgunned in close quarters. If he shoots first or takes his opponents by surprise, however, he may stand a good chance of winning. Despite its accuracy, the recoil of the RPK will cause the gun to raise up slightly when firing consistently. This low rate of fire allows for more controllable recoil during automatic fire. The RPK cannot have a suppressor attached, reducing its stealth capability.

It takes longer to aim with the sights and it has a slower reload speed than most weapons. This makes the weapon ineffective for close quarters combat in the Metro's corridors in most circumstances. It is lethal versus opponents forced to approach the user down a long narrow corridor or opening with a clear line of sight.

The RPK is more practical as a support weapon rather than an assault rifle, meaning the wielder can start shooting while the enemy is at mid-range as the RPK has a good accuracy compared to faster-firing weapons. Since the RPK has a lower rate of fire, the enemy may have the opportunity to deliver the first strike if they are too close.

The RPK is one of the most powerful fully automatic weapons in the game and can stagger mutants such as nosalises and lurkers, making it a useful addition to Artyom's arsenal if he is going up against them, both in the Metro or on the surface. This weapon also has several customisation options that can make it even more versatile.

The RPK has the same set of upgrades as other Kalash-pattern weapons, minus the silencer. However, it has a better magazine upgrade, the Drum magazine, which increases its magazine capacity to 100 rounds, one of the highest in the game, surpassed only by the Gatling. The addition of a drum magazine has no effect on the reload speed. 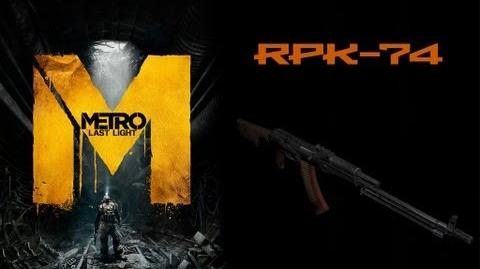 The RPK can only be acquired if preordered from Gamestop and in certain countries, or by downloading the RPK DLC. In Metro: Last Light Redux, the RPK-74 is one of the standard weapons that is availiable to anyone.

If the aforementioned conditions are met:

In-game RPK, as seen from the first person perspective in Metro: Last Light.

In-game RPK, unmodified, as seen at one of the firearm vendors in Metro: Last Light.

This RPK is modified with drum magazine and IR scope

An RPK Shown on pre release marketing material featuring a wood hand guard with metal vented up and a polymer stock much like the kalash in the final version.