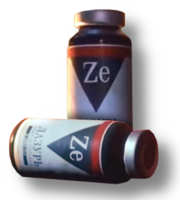 Radioprotector, colloquially known as Green Stuff, is a medicine that helps users to resist radiation.

Radioprotector is a green liquid usually stored in tinted glass vials. A triangular logo with Roman letters "Ze" is printed on each vial. This might originate from the Russian nickname for this drug, "Зеленка" (Zelenka), which can be loosely translated into English as "The Green Stuff". This logo is commonly known in the Novosibisk Metro and the ruling faction, OSKOM, even included it on its banners to emphsize the fact that they were the ones in control of the drug which was essential to survival in Novosibirsk.

A special injector is used to inject the drug into a person's body. One vial contains one dose. The effect of Radioprotector is only temporary, as users need to inject another dose when the previous loses it potency over time. Furthermore, the effect is also short-lived, as it shows when Miller has to sacrifice his Radioprotector to save Artyom, despite the fact that Artyom had already injected his own dose not long before. It was also stated that children and sick people need higher doses of Radioprotector for it to remain effective.

Radioprotector is the only reason for the survival of the Novosibirsk Metro. Before and during the war, it was manufactured at Akademgorodok (and had possibly even been developed there). During the war, the city was struck by a cobalt bomb, leaving it with radiation levels at least eight times that of Moscow, making life in its shallow Metro tunnels impossible without the help of anti-radiation medicine.

Role in The Two Colonels[] 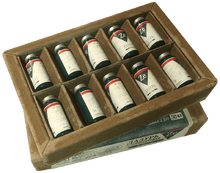 Radioprotector plays an important role in The Two Colonels DLC, which takes place in Novosibirsk before the arrival of the Aurora. As supplies of Radioprotector started to run thin, OSKOM was forced to reduce people's ration of the drug and confiscate excess vials. While officially OSKOM was planning a secret evacuation of the city, the highest ranking OSKOM officials knew the remaining supplies of Radioprotector would not last long enough if everyone was to evacuate, and intended to leave the majority of the Metro's dwellers, including their own men, behind. In the meantime, resistance to the confiscations eventually escalated into massive riots that resulted in the deaths of almost everyone in the metro. Only Colonel Khlebnikov and his son Kirill survived.

Knowing he and Kirill could not survive forever in the Metro, Colonel Khlebnikov later took a single dose of Radioprotector with him while investigating the Novosibirsk Satellite Communications Center for radiation maps of the surrounding areas to find out where was safe. A blind one nesting in the center fought him, however, and his vial of Radioprotector was broken. He died soon after.

Colonel Khlebnikov and his son Kirill had survived on OSKOM seized Radioprotector for a couple of months after the end of the riots, but even between the two of them it could not last forever. A couple of weeks after Khlebnikov left for the radiation maps, the Aurora reached Novosibirsk. Artyom and Miller encountered Kirill in the ruins of the metro, who gave each of them a dose of Radioprotector to help complete their mission in the ruined city. After Miller completed Khlebnikov's mission and found radiation maps of Lake Baikal, he went to find Artyom at the Novosibirsk Institute. Artyom used his dose of Radioprotector while exploring the institute, but much like Khlebnikov, was heavily injured in a fight with the blind ones, and to help him survive Miller used his dose of Radioprotector on him. Miller died because of this, and, even after two doses of Radioprotector, Artyom was left in need of a blood transfusion to survive.

Artyom holding an injector loaded with "The Green Stuff".

A vial of The Green Stuff as seen in promotional pictures for The Two Colonels DLC.

Khlebnikov holding a broken injector. This scene reveals that the drug itself is also green colored, not just the glass the vial is made of.

The label that appears on the phials with the drug.
Русский
Community content is available under CC-BY-SA unless otherwise noted.
Advertisement