Regina is a special railcar built by Andrew the Blacksmith that appears in the Metro: Last Light level of the same name.

The Regina was built for the sole purpose of ferrying refugees from the Reich and Red Line to safety in Hanza or neutral stations. The vehicle is fairly well armoured, more so than a railbike or even a turret car but not designed for combat, carrying no weapons of any kind.

The main dangers it faces are attacks by mutants, the most numerous of which, spiderbugs, are infesting the tunnels beyond Andrew's home. To ward them off, Regina is outfitted with powerful headlights and light bulbs, creating a wall of light repelling any spiderbug caught within. While the lights don't ward off other mutants, it does make the gloomy tunnels less ominous. Andrew loans Artyom Regina so he can travel to Venice, telling him to find Woodpecker who can help him. Before reaching Venice, however, Regina is derailed after colliding with an wooden barrier and forced to be abandoned in Bandits.

Andrew standing next to the Regina

Andrew before revealing the Regina to Artyom

Another shot of the Regina before departing from Andrew's outpost

The powerful lights of the Regina

Side view of the Regina. Its name can be seen written on the bottom side panel.

Andrew's blueprints of the Regina as seen in Metro 2033 Redux 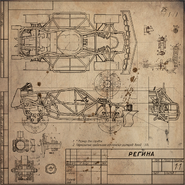 A clearer view of the Regina's blueprint

A buggy aboard the Hanza Cruiser which is visually a stripped-down Regina.
Deutsch Русский
Community content is available under CC-BY-SA unless otherwise noted.
Advertisement