Main location of most novels and games from the Metro Series.

Russia (Russian: Россия), known in full as the Russian Federation (Russian: Российская Федерация), is a country in Eurasia and the primary location of the Metro Series, both in the books and the games.

From northwest to southeast, Russia shares land borders with Norway, Finland, Estonia, Latvia, Lithuania and Poland (both via Kaliningrad Oblast), Belarus, Ukraine, Georgia, Azerbaijan, Kazakhstan, China, Mongolia, and North Korea. It shares maritime borders with Japan by the Sea of Okhotsk and the U.S. state of Alaska across the Bering Strait.

Russia's larger cities that have harboured survivors after the war are Moscow and St. Petersburg. Other locations within the country that are known to have significant communities of humanity's remnants are: Kaliningrad, Serdobsk, Rostov-on-Don, Vladivostok, and various others - many still undiscovered. In Metro 2035, a key spokesperson from Polis reveals that 140,000,000 or 139,000,000 Russians died during the war - which would mean that only 6 or 7 million endured, but it's uncertain how many of them survived the 20 years of post-apocalyptic conditions that followed.

In Metro Exodus, Artyom can listen to radio broadcasts aboard the Aurora and hear a radio operator, claiming to be with the "Civil Defense Command", list many cities as off-limits due to extreme radiation pollution. These cities include Barnaul, Biysk, Kemerovo, Novokuznetsk, Novosibirsk, and Tomsk. Excluding Novosibirsk, none of these cities have metro systems in the real world, so it's unlikely they have any survivors.

Colonel Khlebnikov's annotations of the radiation maps also give some insight about several places. Moscow, Novosibirsk, and Norilsk are all marked as "not suitable for habitation" due to radiation levels (as well as permafrost for the latter). Other areas that Artyom has visited are marked as "risky" (Volga, Caspian/Aral) or "suspicious" (Yamantau) and Burabay has a "Could be suitable for habitation?" comment. Lake Baikal is also marked as "promising", Vladivostok has a simple question mark, and finally two areas only have enigmatic references on their annotation: Kemerovo with "One man is always on the air" and Kolyma with "Better you visit us". 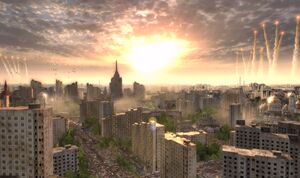 Once the capital of the Russian Federation, home to around 13,000,000 people before the war, used to be the largest city located entirely on the European continent. Devastated by the nuclear bombardment, Moscow now lies in ruins, and its surface is uninhabitable due to high levels of radiation. Moscow and its subway system are the setting for most of the stories from the Metro Series, including many of the books and all of the games released so far (except for Metro Exodus, which takes place in the capital only partially and for a short time).

The Moscow Metro is one of the largest known fallout shelters in the world, since many of its stations were built in preparation for a nuclear conflict. As such, it was the perfect refuge for tens of thousands of Russians who found themselves near an entrance to the massive network of underground tunnels running underneath the city just as death fell from the sky.

Home to over 5,000,000 permanent residents before the war, St. Petersburg was Russia's second largest city. Like its sister Moscow, it also boasted a large metro system whose stations where fit to serve as a place of refuge in the event of an atomic attack. In fact, although smaller than that of the capital, St. Petersburg's subway is time and time again considered one of the most beautiful in the world due to its incredibly ornate stations. Similarly to other towns in Russia and Poland, sentient life on the surface is almost nonexistent while the remnants of humanity gradually degenerate deep below it.

Russia is the main setting of the series. The following books take place within Russia's borders:

As well as the following games set their action in the former Federation: