Saiga-12, known in-game simply as the Saiga, is a magazine-fed pre-war automatic shotgun available only in Metro Last Light. Unlike some Last Light weapons featured in Metro 2033 Redux, it acts as a stand in for the Abzats from Metro 2033, as a powerful automatic shotgun, though the Abzat was later added to the game by purchasing the Season Pass. It is also one of the last weapons Artyom comes across in the game, first purchasable in Undercity and found on numerous enemies after that.

With a layout similar to the Kalash (AK-74), it is able to accept most attachments available for that rifle, which includes the Suppressor, Laser Sight, Red Dot Sight, and IR Sight.

The Saiga-12 is superior to all other shotguns in the game due to its fast reload (on par with an AK-74) and potentially massive magazine size when upgraded with the 20-round extended drum magazine. Thus, it has massive firepower, second only to the Abzats. Even with the drum magazine, it does not sacrifice its rapid reloading capabilities, allowing for massive sustained firepower, this is the most effective weapon at close quarters for players who do not have the Abzats. It is even better than the latter due to easier use and reload speed. However, because the Saiga-12 has high rate of fire, this also means your shotgun shells will be rapidly burned through, require constant scavenge for shotgun shells and spend MGR for them at the shops.

It shoots faster than the Shambler and reloads faster as well, it also can fire more than 6 rounds before reloading. It does not have the ability to fire multiple shells at once like the Duplet, but its automatic rate of fire makes up for that. The only disadvantage compared to the other shotguns is the absence of the extended barrel attachment - which means it suffers greatly at range, unlike the long barreled shotguns that are more competent at medium range with the extended barrel. The Saiga-12 is suggested to be reserved for mutants, especially in Undercity level; it can fire full-auto, but to conserve ammunition, firing single shots is recommended. Only use full auto if you find yourself in tight situation, getting cornered or low on health. Since the effective range of Saiga-12 is relatively short yet powerful while in range, using it in confined areas against armed human enemy is also a good idea.

As Saiga is a Kalash-pattern shotgun, its upgrades are similar to the Kalash. However, as a shotgun, it can't equip a 2x optical sight, because its range is too short to benefit from its magnification. 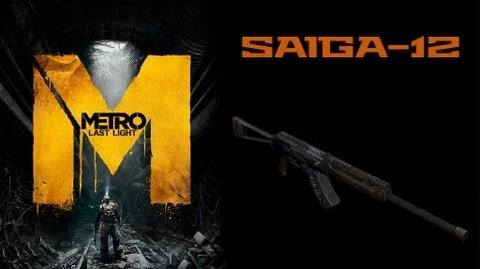 The Saiga-12 is a rotating bolt, gas operated, magazine-fed, semi-automatic 12-gauge combat shotgun. Developed in the 1990s, it has seen use in the Russian military, and is also in use by civilians for sport or hunting. The shotgun was built on the famous Kalashnikov action that has proven itself reliable over decades of use in combat.

In-game Saiga-12, as seen from the first person perspective in Metro: Last Light.

The real world counterpart of the Saiga-12

As seen in the pre-alpha teaser trailer

This Saiga is modified with drum magazine, red dot sight and laser sight.

The Saiga-12 with night vision sight and silencer

The Saiga fitted with a makeshift grenade launcher in Metro 2033 Redux.
Русский
Community content is available under CC-BY-SA unless otherwise noted.
Advertisement