Lance Corporal Samuel "Sam" Taylor (Russian: Сэмюел "Сэм" Тэйлор) is a character who first appears in Metro 2035 and returns in Metro Exodus. A former United States Marine, he joins Artyom's crew aboard the Aurora armored train and serves as Colonel Miller's personal bodyguard. Sam is also a playable character in the Sam's Story DLC, that takes place after the events of Metro Exodus and sees Sam exploring the ruins of Vladivostok in hopes of finding a way to return to the United States and reunite with his father.

Born in San Diego, California, before the war Sam's father convinced his son to enlist in the United States Marine Corps. In the Marines, Sam served in the Middle East and Afghanistan, before being sent from war zone to war zone, eventually being stationed as a Marine Security Guard for the American embassy in Moscow, Russia. When World War III began Sam was in the Metro, which saved him from the bombs, but shortly after several Russian survivors attempted to lynch him for being American. He was saved by Miller who stopped them and convinced Sam to join the Spartan Rangers, where he eventually became the colonel's personal guard.

20 years later he and everyone else in the Metro thought Moscow was the only city where humans still survived. Shortly before the Red Line initiated the Battle for D6, Sam was injured and wasn't able to fight in the battle. In the aftermath, he seemingly blamed himself for Miller being crippled in the battle, as after Sam recovered enough he didn't let anyone else push the colonel's wheelchair, and stayed close to him even after Andrew the Blacksmith made Miller a pair of prosthetic legs.

After Artyom discovered life outside the Metro, Sam became part of the newly formed Aurora Crew and left Moscow. While initially apprehensive about his loyalties, as Miller and most of the Spartans were convinced Russia was occupied by NATO forces, after realizing that there was no occupation force and life outside Moscow, he began to dream about returning to the US and seeing his dad again. After the Aurora crew settled at Lake Baikal, he left not long after Miller's funeral to try to find a way to cross the Pacific Ocean go back home.

After Miller's death, Sam left the order to head towards Vladivostok, expecting to find a boat there so he could cross the Pacific sea and return home. He was given Saul's van, which he drove until it broke down, replacing it with a tractor which took him to Vladivostok. There he found a captain who showed him the local submarine, but before he could go and investigate he gets captured by locals who take him to their leader thinking he was with the captain.

Sam befriends the leader of the group, Tom, and thanks to them both being American, Tom offers him a ride home if he helps him. Sam accepts because Tom is in control of the submarine and thinks it’s his best chance of getting home. Eventually he finds and befriends the captain who agrees to help and fuel the submarine.

When Sam gets back to Tom, the captain gives him the choice to blow up the submarine. The confrontation between Tom and the captain gets interrupted when Klim, Tom’s right hand man, betrays Tom and attempts to take over the Submarine which he plans to use to nuke other countries. Sam fights his way to Klim but gets badly injured, Sam still bests him in combat and kills him.

Sam then has the choice to blow up the submarine and stay stranded in Russia or not which helps him finally get home where he will continue searching for his father.

Sam on one of the official Metro Exodus screenshots. 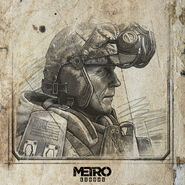 A portrait of Sam from Artyom's diary.

Sam visits Miller's grave before going on his own journey.

Sam leaves the Spartan Order to embark his journey back to the US.

Sam recovers from his wound in the USS Mayflower.

Sam is unable to reach America in the Captain's Ending of Sam's Story.

Sam reaches San Francisco in one of the endings of Sam's Story.
Русский
Community content is available under CC-BY-SA unless otherwise noted.
Advertisement