Sasha (Russian: Саша) is a young boy encountered at the beginning of the mission "Child".

When Sasha is first found, he's sitting by the corpse of his uncle, in hope of being able to wake him up. When Artyom makes it clear that he is observing him, Sasha seems to understand rather quickly that his uncle is dead. Despite this, Sasha accepts the situation and is escorted back to his station by sitting on Artyom's shoulders. He is quite talkative and seems to be very curious of his surroundings while not fully realizing the danger he is currently in; Sasha alerts Artyom when enemies are near, though this shouldn't be depended on. When Sasha is on Artyom's back the player cannot run and also the turning speed becomes somewhat sluggish. This also increases the amount the gun sways whilst aiming, making precise shots and quick turns much harder, which makes fighting lurkers even harder due to their fast movements.

At the end of the mission, Sasha is reunited with his mother, who expresses her regrets about his uncle's death, but is thankful that Artyom brought Sasha back to her. She offers the player some ammunition which they can either take or refuse. 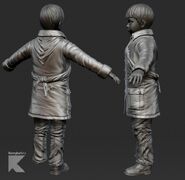 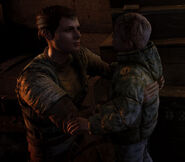 Sasha and his mother in Metro 2033 Redux.
Deutsch Русский
Community content is available under CC-BY-SA unless otherwise noted.
Advertisement