1 driver, up to 6 passengers

Saul's Van is a vehicle in Metro Exodus. It serves as Artyom's main mode of transportation in the Caspian Desert and Novosibirsk.

The van is first seen when Saul and another raider use it to intercept the Aurora upon arrival in the Caspian Desert, then proceed to drive off to inform their leader. A short time later, Artyom infiltrates their outpost, and after a confrontation with Saul, acquires the key to the van. Once acquired, Artyom will use it to traverse the desert, and drive to various points of interest. Following the events in the Caspian Desert, the van is loaded onto the Aurora and brought along on the crew's journey.

Saul's van is later modified and fitted with lead sheeting, which allows Artyom and Miller to drive through the radioactive ruins of Novosibirsk without getting critically irradiated. They are forced to abandon the van, however, when they find the road blocked by a tank. While Artyom heads to the research institute to look for a cure for Anna, Miller returns to the van with Kirill and drives to the SatCom Centre to find information regarding a habitable place for the Aurora crew. As Artyom manages to escape the institute, but is exhausted due to radiation poisoning, Miller rescues him and takes him to the van. Miller manages to drive out of the city before passing out, forcing Artyom to drive the rest of the way. Although Miller dies from radiation poisoning, Artyom and Kirill make it back to the Aurora, and the van is taken aboard again.

At some point after the Aurora's crew establish a new home at Lake Baikal, Sam will take the van on a journey to Vladivostok. It breaks down along the way, however, forcing him to abandon it and travel on foot until he finds a tractor to drive the rest of the way.

In its original condition, Saul's van is rusting, missing several windows and one of its headlamps, and has bike handlebars as a makeshift steering wheel. Despite the vehicle's decrepit appearance, its engine is in good running condition. It is later given improvements, including; lead sheeting, new headlamps and windows, and a proper steering wheel.

Saul's van in the summer

The van outfitted with anti-rad protection 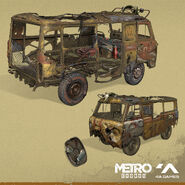