A seagull (Russain: чайка) is a marine bird appearing in Metro Exodus. It can be found in Vladivostok.

Seagulls are medium-sized flying birds found on nearly every marine coast on the planet. There is an abundance of them in Vladivostok, although it's unknown whether they can be found in other seaside cities of Russia. Similarly to dogs, frogs, and deer, they are one of the few species of animals to survive the war with no visible mutations. 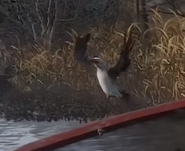