Complete the game without killing any Humans unless forced to.

Shadow Ranger is an achievement/trophy in Metro: Last Light.

This achievement is awarded to players for not killing a single human NPC unless the situation calls for it. Shadow Ranger playthroughs demand a stealth oriented strategy with minimal gunfire on human opponents and no unnecessary silent takedowns with the knife. Mutant kills, touching ragdolls with Regina, crushing them with the airlock in "Pavel", and knockout punches do not constitute against the achievement. However, taking filters from enemies gas masks on the surface levels "Depot" and "Contagion" remains a point of debate.

A developer from 4A Games has stated that all enemies on "The Chase", "Red Square", and "D6" levels can be safely killed and do not count against the achievement. If the player does mistakenly kill a single enemy on a level other than those previously mentioned, they will have to start over with a New Game. Reloading a save or checkpoint does not fix this [1].

Note that it's possible to beat all levels without killing anyone, and a few players make it a point of personal pride to beat the game this way. Hints helping achieve this are listed below. 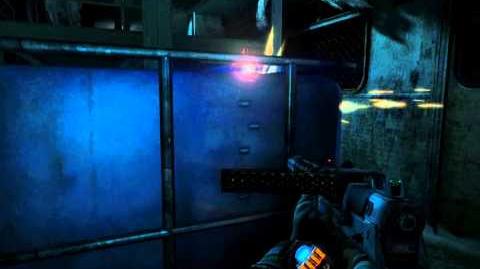 Hanza train taken back from Reds in HtH combat

It appears that the damage is done to the player by a script during the railcar sequence, not by actual NPCs. The only enemy that is actually shooting at you is a machine gunner located at the last train car.

Crouching behind armor doesn't offer any protection and the entire section requires strict timing. The player needs at least four medkits out of five to reach the train. Exactly four are available at the end of the previous level in a locker and three more can be taken from the soldiers on the train itself.

Metal barrels and blue metal mesh boxes seem to be mostly impenetrable for enemy fire and can be used as cover. It's possible to shoot the soldiers once with a weak weapon to make them stumble and get a couple seconds to approach them safely, as opposed to waiting for them to empty their magazines and start reloading. 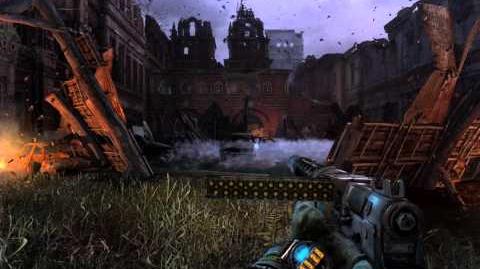 Pavel's team in Kremlin dealt with in HtH

Once the player crosses the square though the trenches, Artyom will be ambushed at the ruins of the State Historical Museum. The yard will initially appear to be desolated, but once Artyom approaches the gate, Pavel's team will reveal themselves. Pavel will demand him to drop his weapons over the loudspeaker, as he was ordered to take any Spartans alive. When he recognizes Artyom, he says that general Korbut had a specific order about his "old friend" and tells the soldiers to execute him.

There are a few hiding spots available to Artyom in the museum, but the one behind the wrecked cars on the right side seem to offer most protection from incoming fire. The Baby Dark One will enhance Artyom's reflexes and will let him sense the soldiers through the walls for a short duration two times during the fight.

In about a minute, four soldiers will enter the yard through the windows on the ground floor in groups of two. Just like during "The Chase" level, it's possible to shoot them once to make them stumble and make a safe approach for a takedown.

Once the group is dealt with, Pavel will use his sniper from the upper floor. You can either shoot him (as he can't die at this point) or wait until he gets bored. His weapon is the only one with the red laser.

Once he gets bored or gets damaged enough times, he will order the remaining soldiers to open the gates and attack you. One of them is heavily armored and will actively approach Artyom, while the other two stay inside the gates.

It's required to shoot Pavel at the top of both staircases and the end of the corridor to progress further. The snipers disappear once you get upstairs. 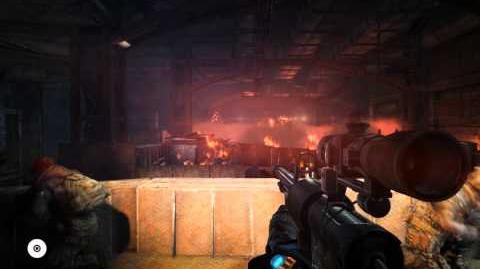 Stay crouched behind the barriers and let the AI kill everything, they are more than capable of defending the fortifications on their own. Once the tank arrives, you can use the spare fully-upgraded Preved that lies next to the ammo box on the left side of the platform and shoot out the highlighted areas of the machine.

Riot shields will open up three times giving you a clear shot at the flamethrower soldier behind them. After enough damage is done, his fuel tanks will catch on fire and the resulting explosion will take out most of his protectors. The Rangers will finish off the survivors.

After completing the final sequence, the ending scene will trigger and then your achievement/trophy will be earned.