Ranger has other uses. Please see Ranger (Disambiguation) for other meanings.

This is the article page for the Rangers. For related articles please refer to the category page.

Dark Ones (Until D6)

The Rangers of the "SPARTA" Order (Russian: Орден «СПАРТА») are a group of elite battle hardened soldiers that roam the wasteland, consisting of the most skilled and deadliest warriors in the whole Metro. The Rangers move individually or in small units helping settlements, as well as fighting bandits and mutants. Some also appear to guard and protect Polis.

After the events of Metro Exodus, the Spartan Order has been split into two groups: the group that follow Miller and Artyom out of Moscow to Lake Baikal and the remaining ones in the Metro.

The origin of the Rangers are unknown, but some of the members may have been soldiers from the Russian Army or from the Russian Special Forces (Spetsnaz) before the nuclear apocalypse. They may also have been mercenaries or some sort of other armed forces. It's known, however, that they have been operating in the Metro since the Great War of 2013. The group has always been led by Miller who is often referred to as "The Colonel". The Rangers have also always been the guard and military force of Polis. However, they also act independently.

Rangers seem to be greatly feared by the bandits, Reds, and Nazis alike. In the level "Dry", a conversation between a few bandits near the rails can be heard. One bandit mentions how a lone Ranger single-handedly took out large groups of men and how nothing in the tunnels can stop them. The bandit also mentioned that they might not even be human because of their fighting skills. Upon questioning him, the bandit reveals that the group was killed by a "lone Ranger" outside Riga station - the same bandit outpost taken down by Artyom when he was traveling with Bourbon. Also, in the first stage of Metro: Last Light, a Nazi officer mentions that normally the Fourth Reich doesn't interfere with the business of the Rangers.

The Spartans maintain a large amount of bases and outpost throughout the Metro. In both the Metro 2033 book and game, their main base is Polis. However, in Metro: Last Light, after the discovery of D6 they make their main base there. The Rangers maintain two permanent base located in churches on the surface, both known as Sparta. One is located near the Smolenskaya station, and the other near Oktyabrskaya station.

After the Battle for the Bunker and during the events of 2035, the Rangers moved their permanent base to Smolenskaya station, close to Polis, and to Arbat, where Miller has set up his HQ.

What the rangers lack in number, they make up for in technological standards and are considered to be the most technologically advanced in the whole metro system along with Polis. Most of them were soldiers and technicians before the 2013 apocalypse, giving them an advantage in understanding various pieces of equipment. Pre-war weapons are maintained by the most skilled gunsmiths the Metro can offer, giving them a Kalash over a Bastard. While the Rangers have a superior armory over any in the metro, their mechanics also make sure that they have a steady supply of well maintained vehicles, both rail within the Metro and off-road on the surface. Due to their alliance with Polis, they also are able to understand a lot of pre-war scientific knowledge about technology or biology since D6 and Polis are only two stations able to analyze and understand the bio-weapon unleashed by the Red Line.

Throughout the Metro games the Rangers wear a distinctive set of uniforms. In Metro 2033, almost all Rangers, except Vladimir, are seen wearing a uniform consisting of a heavy sherpa lined jacket, combat trousers and boots, a heavy chest armor, spalders, and the iconic Ranger helmet. This uniform is usually dotted with ammunition pouches, med-kits, knives, and a few rangers wear it with a hood.

In the sequel and Redux, the Rangers' armor has had a drastic change, the only thing remaining the same being their combat helmet. The rangers use a mix of dark blue jumpsuits with armored vests, and an urban-camouflaged body armor. The distinctive helmet is also sometimes used in conjunction with a Russian K6-3 helmet, balaclavas, and woolen caps. Artyom and Anna are both seen wearing the hazard suit. Also, several Rangers, including Artyom, are seen wearing the Heavy suit as well.

On terms of the Rangers' tactical methods, they are geared towards specializing in multiple uses of weaponry. The Rangers maintain and keep their infantry the strongest. The group uses more front line riflemen tactics though exceptions exist. The group contains a elite sniper squad, one member being Anna, and a small demolition squad as seen in D6. While the Rangers have a wide variety of skilled specialists, they act mainly as an infantry force.

The order have approximately 100 combat ready members due mostly to the fact that they only take in the best of the best. This is very small, even compared to Reich standards. What they lack in size, however, they make up for being the greatest warriors in the whole Metro. They are the best of the best and a frequent comparison is five red soldiers are equivalent to one Ranger. One ranger in D6 asks another ranger what their strength is, guessing around 200. It is possible that the order has more than 100 people, but some may be dedicated specialists such as technicians and engineers, wounded rangers, and members deployed elsewhere, meaning that there is roughly 100 combat ready members that can be drawn upon, but there are more in total.

In the novel Metro 2035, Miller states that after the battle for the bunker the order had significant losses, with only 59 Rangers surviving. After secretive negotiations, Hanza gave the order dozens of potential recruits, taken from their various special forces and elite units. Recruitment whittled them down to only 50 men, outstanding enough to join the ranks of the order. In the year 2035, the orders full strength is 108, "including orderlies", and minus Artyom after he left the order.

The first Ranger Artyom encounters during the course of his journey is his step-father's friend, Hunter. Hunter has come to Exhibition because of reports of telepathic mutants attacking the station. He, Artyom, and Artyom's step-father, Alex, defend the entrance to the hospital against several waves of nosalises. After the battle, Hunter leaves and tells Artyom that if he doesn't return to Exhibition, Artyom must deliver a message to Polis. He then hands Artyom his Ranger Token, an enameled dog tag, and tells him to find Miller in Polis. He never returns, and in the game's canon is presumed to be dead or missing.

Artyom himself had been addressed as "Ranger" a couple of times during the game. The first takes place if Artyom rescues a group of Red soldiers captured by the Fourth Reich on the battlefield between the Red Line and the Fourth Reich. One will say "We heard there was a Ranger in the vicinity, good work". The second occurs when Artyom returns Sasha to his mother. Before Artyom walks to the surface, one of the soldiers bids him goodbye by saying "...good luck to you, Ranger".

Artyom encounters many Rangers, and much evidence of their work along his journey in the game. Hunter's message to another ranger named Red can be found near the end of "Dead City 1". The message talks about heading to Exhibition with some heavy gear, to try and help fight against the coming threat.

One man named Khan, who is affiliated with the rangers, guides Artyom to the armory. Khan has a different outlook on the situation compared to that of the other rangers. He doesn't believe the Dark Ones, mutants, or anomalies are evil, they are just now what the world is, and that humanity should move on with them.

The next group of rangers Artyom meets are Pavel and Ulman, who save Artyom from being executed by two Nazis. Ulman leaves the group, while Pavel and Artyom head to Polis. Pavel, however, does not survive the trip. Artyom meets up with Ulman later on and they reach Polis

At Polis, Artyom meets Miller, the leader of the rangers. After failing to gain support from the Polis Council, Miller and Artyom decide to find D6. Miller, Artyom, and Danila head towards the library to find the location of D6. On the way, Danila is injured and must be taken back to Polis, while Miller leaves Artyom on his own to find the documents leading to D6.

When Artyom leaves the library with the D6 dossier, he is confronted by a librarian, but before it could attack Artyom, Miller and Ulman showed up in an armored car, and run it over. They take Artyom to Sparta where Artyom meets the remainder of the rangers: Boris, Vladimir, and Stepan, along with Khan and three unnamed rangers.

Together the Rangers and Artyom travel to D6, and though citing a few casualties in their numbers, are able to get D6 functioning enough to send a missile to the botanical gardens. On the surface, Miller and Artyom encounter more Rangers, while they are all ambushed by watchers and demons. Barely making it out alive, the two make their way up Ostankino Tower where they launch the missiles at the Dark Ones.

The Rangers (now known as The Spartan Order) of Metro: Last Light have changed very little. Outfitted with new armor with the signature "Спарта" (Sparta) written on the upper back of their uniforms, the Ranger forces have occupied D6 and fortified it into their new permanent base, although they don't have full control over the facility and many of the parts remain locked or unexplored. D6 is now more extensively shown, with the living quarters of the Rangers and Artyom, gyms, an armory, and mess hall. The Rangers now move about more quickly around the Metro, using the secret Metro-2 system for quick transport. While the Rangers pose as a key faction in Metro: Last Light, they don't share in nearly as much action as they did in Metro 2033. The Rangers are depicted prominently early in the game, as the rightful holders of D6, as well as later in the game in Sparta Base, and as a party in the Polis peace conference; but the Rangers are featured most predominantly at the very end, in the battle for D6 against the Red Line. The game's two endings serve as the deciding fate of the Rangers. In the C'est la Vie ending, the overwhelmed Rangers are forced to sacrifice themselves as martyrs, and destroy D6 so that the Red Army inside cannot get their hands on samples of a potent bioweapon. Conversely, in the Redemption ending, the tides turn at the darkest moment, and instead of throwing the detonation switch, the Baby Dark One appears with his kin and helps turn the tide of the battle for victory, but at great cost to their numbers.

Rangers mentioned, but not seen[]

The Rangers in D6 having a meeting

The Ranger Quartermaster at D6

A Spartan helmet in Metro Exodus 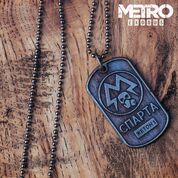 Some Spartan crew members of the Aurora.

Miller giving orders before the mission in Novosibirsk. 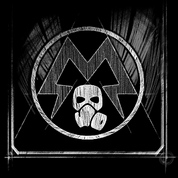 Symbol of the Rangers from Metro Exodus diary