Never have to be shot at.

The spiderbug (frequently abbreviated as spiders, Russian: Пауки) is an arachnid-like ambient creature which appears in Metro: Last Light and Metro Exodus. It combines the features of a spider and scorpion, but unlike true arachnids is deathly vulnerable to light.

Large spiders are enemies encountered in several chapters throughout Last Light, first appearing in "Reich", but first fought in "Torchlight". All variations of spider will avoid any light sources, including Artyom's flashlight, so turn on all the available lights in your area to create safe zones in case you need to retreat. When exposed to the flashlight beam, spiders will begin to smoke, turn a reddish-black color, and often backpedal away from Artyom to attempt to break line of sight, such as by scurrying behind a pillar or around a corner. Once they are safely out of the light, they will come back to attack again. Adult spiders have a thick armored shell that is impervious to gunfire, and must be flipped onto their backs via exposure to light to kill; these can be distinguished from their weaker hatchling counterparts, that are not bulletproof, by their brown coloration. Large spiders come in several different varieties:

If they are exposed to the flashlight continuously, they will flip over. If Artyom continues to shine his flashlight at them, they will quickly die, making it unnecessary to use ammo - saying that, only a blast from a Duplet or a few Kalash rounds are enough for a kill. Artyom can also stab flipped-over spiders, although keeping the flashlight on them is arguably easier and faster. Sometimes if they are getting too close, or other spiderbugs are nearby, the flashlight trick may be useless - be ready to shoot or the quick-button event as they may pounce Artyom (usually quickly tap the action key or button), to eliminate them quickly. 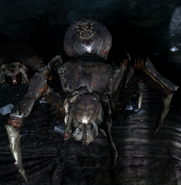 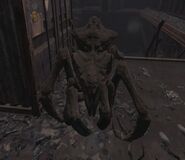 Additionally, in areas infested with spiders, small spiders can often be seen emerging in groups of 5-10 from fleshy egg sacs along the walls and floor, and emerge when approached. They are also found clustered round various dead bodies on the surface and must be removed to access the body (and any filters, ammunition etc. it maybe carrying), indicating the spiders are carnivorous, though it's unlikely the small spiders killed any of the bodies themselves.

There is also a fish tank inside the Venice brothel that contains two small spiders, one of which will jump at Artyom when approached. This indicated that, although they are not tame, they can still be kept as pets.

These spiders seem to be immune or at least resistant to light, which might change later in their life cycle if they do grow into the adult female spiderbug; a classification based solely on proximity to larger insects. 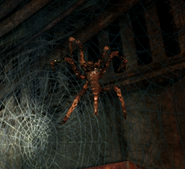 A small spider sitting in a web 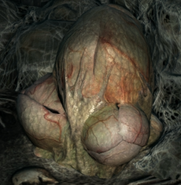 Large spiderbugs are only known to be found in deepest areas of the Metro and surrounding caves where light is very faint or non existent. Due to their weakness to light, they cannot live on the surface. Upon discovering an area that is isolated or has almost no ambient light, they will usually cover it in webbing and then start laying eggs. Therefore, transforming the area into a nest.

Little spiderbugs live everywhere across the Metro due to their apparent lack of vulnerability to light. Small spiderbugs can often be seen in ventilation shafts and even on the surface eating carrion and hunting invertebrates. Small spiderbugs however, seemingly avoid heavily populated areas of the Metro and areas of relatively intense light exposure.

In terms of geography, spiderbugs can be found all over post-apocalyptic Eurasia, from the dry deserts of the Caspian to the moist caves and tunnels of the Valley, and even as far away as the volatile coast of Vladivostok. As long as there is no light, it is a suitable habitat for their kind. Spiderbugs are also resistant to extreme amounts of radiation, as they can be found in the Vladivostok bunker, which has radiation levels comparable to those of Novosibirsk. The radiation can still cause them to mutate, however, as implied by the presence of zap spiders.

Spiderbugs are carnivores that hunt by ambushing their prey or confronting prey in a horde. After the prey is killed, they likely carry it away to the main nest for food storage. The exact components of its diet are unknown, however. Adult spider bugs and hatchlings likely prey on subterranean animals such as nosalis or lurkers, and are known to eat humans as well, based on the large amounts of partly-eaten corpses that can be found in their nests. Small Spiders likely sit in their webs waiting for small insects to fly in.

Like the shrimp, it's unknown how exactly the spiderbug life-cycle works. Spiders are distinctly separated between two sizes: large and small, with the small spiders arguably being infants and large spiders being adults of some variety. To support this theory, small spiders - though found around the metro and surface - are very frequently seen around large ones, and can be seen coming out of egg clutches whenever (sometimes only when) Artyom passes near them. However, at the same time, adult spiders, specifically the hatchling variant, are also seen emerging from the egg clutches.

The appearance of both types of spiders emerging from the same type of egg is most puzzling, reflecting either two separate, but co-existing, symbiotic variants of the same species of spiders, or several stages of reproduction: starting as eggs; hatch as small spiders in egg clutches; emerge; eat; make webs; move into new clutches; becoming hatchling adult spiders; mature; copulate. Small spiders themselves could even be an independent species emerging from a superficially similar mass egg-case.

A Spitter spider in Metro Exodus

Small spiders as seen in the Venice brothel

Small spiders in their web, illuminated by the flashlight

A clutch of spider eggs

A deceased "standard" spider, badly burned from flashlight exposure, viewed from behind

A spider seen in the distance (center-right)