View source
watch 02:52
Roblox: DeepWoken - The Loop
Do you like this video?
Play Sound

Stalker (Russian: Сталкер, singular) is the general term in the Moscow Metro, as well as parts of Poland and elsewhere, for any individuals who venture to the irradiated surface for valuable supplies - often risking life and limb to keep the whole community alive.

Stalkers search for fuel, ammunition, and other salvageable materials on the surface to sell in the Metro or keep for themselves. They sometimes have small hideouts on the surface, built into ruined apartments or office buildings where they stash their findings, though most live in stations, bringing them their findings. Stalkers often work alone, or in small teams, but they universally aid each other by leaving supply drops on the surface, leaving brightly coloured markers as guideposts in the swamps, and having flashlight signals to communicate. Many Stalkers are mentioned as having pre-war military backgrounds. They are also very often well-armed, similar to rangers and soldiers. They tend to wear armoured vests, hazmat suits and long trench coats.

It's implied that a Stalker's life expectancy is very low, so those who venture to the surface must be either thrill-seekers or suicidal - in the lawless Metro, either is possible. Stalkers are often considered insane by most other inhabitants of the metro, with Bourbon referring to them in the video game as "crazy devils". Equally though, everyone relies on them for everything, giving them an almost godly status. Very few Stalkers are ever seen in the games - most are desiccated corpses that Artyom can search for supplies from, again alluding to their deadly profession.

While many Stalkers are known to work independently, stalking to support themselves or their families, some Stalkers have acknowledged that working together on Stalking mission can be beneficial. One example being the Protagonist and his friends found in the Developer Pack (DLC) mission Spider Lair. Political factions, however, have also been known to commission large Stalker groups. Some examples of these are Polis, which will commission the Spartans to bring pre-war technology from the surface, and the Nazis who capture Artyom in the level "Ashes" are Stalkers.

OSKOM, in Novosibirsk, had their own version of the Stalkers, apparently all military, primarily dedicated to the search of satellite maps in the Sat-Com centre, and Radioprotector in the Institute. As the population depended on Radioprotector for survival, their role was much more vital than in Moscow.

Stalkers have a more central role in the novel than in the video games, replacing the rangers completely. They are envied by station dwellers for their skill and bravery. The Rangers in-game are derived from the faction of which Miller is part of in the book - he leads a commando unit of Stalkers into Park Pobedy station to rescue Artyom, or, more specifically, Anton, wearing similar armor to the Rangers in game. Much like the Rangers, they still play a big part in the defense of Polis, with the Kshatriya class being warrior-stalkers dedicated to the station.

As stated in the books The Promised District and The Promised Human, the independently working stalkers of post-apocalyptic Kraków have come to be known as "ghosts" (Polish: "duchy", pronounced somewhat like dukhi). They are extremely respected for their survival skills, expertise, knowledge, proficiency in combat, and sovereignty from all large factions. One of them is a Russian man nicknamed "Wesoły".

The first identified Stalker in Metro 2033 - like the rest, he is dead 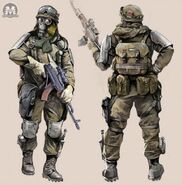 Concept art of the Metro 2033 video game. While none of the concept art images explicitly describe the figures as Stalkers, they feature many characteristics common to them 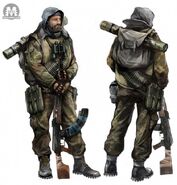 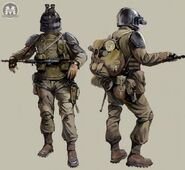 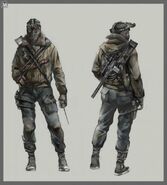 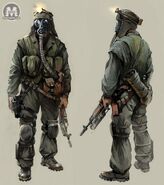 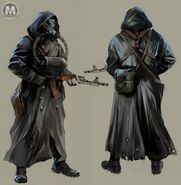