Albeit the translated Universe of Metro 2033 series has been popular in Poland for years, prior to this book there has been just one Polish entry to the series - In the Firelight - a collection of short stories by fans, released only in digital format. In contrast, The Promised District is the first professional Polish novel in the series. Since it is set in the writer's homeland, it features many references to Polish culture and has a unique atmosphere that makes it stand out due to its new setting.

The action of the novel takes place almost exclusively within the Nowa Huta district of Kraków, southern Poland. During World War III, the enemy dropped 2 nuclear bombs near the once glorious city. Less than 20% of Kraków's pre-war population lived through the explosions. Even fewer have managed to endure the following conflagrations, as well as the lethally long winter that followed. By 2033, almost 2 decades after the worldwide conflict ravaged the planet, the surface of the Earth remains uninhabitable. The snow has melted years ago, only to reveal immense amounts of radioactive ash. However, thanks to the expansive network of underground fallout shelters built beneath Nowa Huta, a portion of the district's former citizens lived on... but humanity is deteriorating.

17 year old boy Marcin and his 19 year old assumed sister Ewa Dziekierzyńska are orphans; took in by Stanisław Koszyński (known commonly as Mister Onufry) and his motherlike cousin Wanda Tazar, they were raised like family and accepted into the only subterranean troupe. Alongside their adoptive mother and the charismatic actor Piotr Rzepiecha, they make ends meet by starring in Mister Onufry's inspiring adaptations of pre-war plays. Everything seems to be going in their favour, until suddenly they are accused of treason and theft. Betrayed by Piotr and separated from their mentors, Marcin and Ewa must flee from the only home they have ever known. Upon leaving the safety of the fallout shelter for the first time, their escape is hindered by the inhospitable outdoors. But they are soon joined by a Russian stalker nicknamed "Wesoły", who has also been falsely incriminated and decides to help them.

Authoritites of the underground federation send hardened Lieutenant Przemysław Siedlar (alias "Szrama") and his newly assigned team of stalkers on a mission to capture the fugitives and bring them to justice. During this journey, they are joined by the charming comrade Ninel and her subordinate "Gorący" from the Commune. The plot alternates between following the exploits of protagonists Marcin and Siedlar, along with their respective companions, whilst also focusing on much of the political intrigue between the numerous factions that have formed in post-apocalyptic Nowa Huta. As the remnants of mankind continue to turn life into hell on earth for each other, will they be able to stand against the intellectually unanimous hordes approaching from the west and survive the looming onslaught?

Art for The Promised District 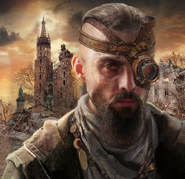