The Right to Life (Novel)

The Right to Life

The Right to Revenge

The Right to Life (Russian: Право на жизнь) is a novel that is part of the Universe of Metro 2033, a long-running series of short stories, novellas and novels written by different authors, all set in the world of Metro. The Right to Life, written by Russian author Denis Shabalov, was originally published in March of 2013. Although there is currently no English version of the book, The Right to Life has been translated into one other Slavic language - Polish. The novel was translated to Polish by Paweł Podmiotko and published in Poland on the 31st of August, 2016.

Shabalov's second novel in the series is a direct sequel to his first, The Right to Use Force. It continues Shabalov's trademark style of writing with great attention to tactical and military detail, likely due to the author's background in the Russian Armed Forces, but this time with no overuse of footnotes. The book attained a degree of popularity among readers that is similar to that of its predecessor.

Set shortly after the events of the first novel, the plot this times leaves the writer's hometown of Serdobsk to take us on a long journey northeast, across Kirov and Ukhta, all the way to Beryozovka. The protagonist is once again Danila Dobrynin with his brother-in-arms and best friend Sasha Popovich at his side. Along with their skilled stalker friends from the shelter in Serdobsk, namely their Chinese deadeye sniper Wan Li "Counter" and the hulking Aleksey or Lyosha (aptly dubbed by his comrades as "Shrek"), they join the caravan of the Brotherhood in their quest to find and storm the depot of the Rosrezerv. They are assigned to a squad consisting of Professor Semyonich, Sergey Kubovich, and Ahmed "Apricot". However, Major Hasan Al-Fattih ibn Abbas' convoy and its mission turn out to be much more than they initially seem.

The second book in Shabalov's trilogy explores the deeper reaches of European Russia, revealing what life is like for the very few and small communities of mankind in the less urbanised areas of the former federation across stretches of wild taigas; they have persevered thanks to pockets of unscathed earth and clean air that have survived in the secluded countryside, which was too far from any strategic points to be hit by nuclear bombs. In addition to the Mikser, Vyrodok and other mutants familiar from the first novel, we are introduced to the somewhat intelligent and seemingly harmless, yet immensely powerful and just as repulsive Swallower. The author also reveals that new technologies based on pre-war prototypes, such as the fearsome "unikom" powered exoskeleton (possibly developed by the remnants of influential institutions in Japan, China, or Korea) exist in the Metro universe, but in extremely limited numbers. 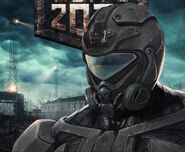 The "unikom" powered exoskeleton featured in the story
Polski Русский
Community content is available under CC-BY-SA unless otherwise noted.
Advertisement