Throwing Knives are the weapons of choice for players who prefer stealth to going in guns blazing in either of the three Metro games. They are silent, deal extremely high amounts of damage and are reusable, as well as being found almost everywhere in the Metro.

In the Metro, ammo for your other weapons can be, at times, scarce, thus creating the need for a weapon that can be used and retrieved multiple times. Furthermore, Artyom will often find himself completely out-manned and outgunned, meaning stealthily killing his enemies will give him a greater chance of survival than shooting on sight.  The perfect weapon for this is the throwing knife; it will kill your human opponents in a single hit from a sneak attack, and it is a silent weapon, meaning enemies killed by them will not be heard by nearby enemies, unless they are within earshot to hear the body dropping, or find the corpse. It is not as effective against mutants as they usually come in numbers too great for just 5 knives to handle, (10 on ranger mode) and many have armored shells that cannot be pierced by the blade. Despite this, many mutants can be killed instantly if you are hidden and they are not alert. Generally, the closer to the target the more damage you will inflict - with humans, however, the hit is always an instant kill, wherever on the body it hits.

Throwing knives can be bought in every station that has a weapon vendor, but because of their re-usability, that should never be necessary; they can be often found lying around in or around any place where hostile humans are present. Throwing Knives can be found shortly after the Riga station and onwards, in Metro 2033, and are found after escaping the Reich concentration camp in Pavel, in Last Light. Generally, the knife can be picked up from fallen enemies, though they can be lost easily in scenery or if they hit a detachable ammunition pouch. However, if a throwing knife hits an ammunition pouch on an armored enemy, the knife may only detach the pouch, causing no damage to the enemy, but alerting him to your presence, as well as meaning the knife is harder to find. 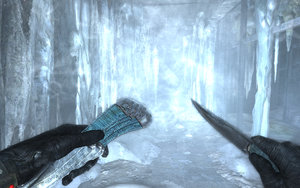 A set of Throwing Knives

One of the more useful weapons for stealth gameplay, as it has theoretically unlimited ammunition and is a one hit kill for humans, lurkers, lesser Shrimps and nosalises. They become even more deadly at Ranger difficulties, killing watchers in one hit, and even being effective against librarians, although a one-hit kill is extremely unlikely.

The biggest problem with throwing knives is that they're not an object-piercing weapon. Enemy soldiers, especially later in the game, wear a lot of miscellaneous and protective gear - bags, pouches, ammo clips and magazines, gas masks, helmets, shoulder and knee pads, and even the weapon they are holding - and if the knife hits any of these it will just bounce off harmlessly, alerting the enemy to your presence (though quickly throwing another knife may kill the target before he can call for help). As a rule of thumb, only a square hit in the back is a 100% guaranteed kill, and because enemies come at various angles and there might be no time or shadow to position yourself properly, you should consider sticking with the Helsing if you want to sneak your way through the levels. From the front, the neck is the only guaranteed fatal spot, as gear is unpredictably placed across their chest and many enemies wear armored gas masks (the Nazis are particularly fond of this, along with heavy armor on the rest of their body). On higher difficulties and at closer ranges where the knives are more damaging, for human enemies it is recommended to throw the knife at the less armored backside, rather than the frequently armored head, arms, or legs.

An extremely useful tactic on Ranger difficulties on Metro 2033, where the crosshair is removed, is to perform the stabbing motion with the throwing knives. Simply pressing the alternate fire button will perform a normal stabbing attack with the knife. This attack will have Artyom stabbing at the middle of the screen, allowing not only easy kills, but a technique to throw with much more accuracy. In Last Light, this is replaced with a silent throat slitting move that will also kill all enemies silently, though care must be taken that the enemy does not turn around as you are sneaking up on him. However, if the player is fast enough a melee kill can still finish the enemy off before he opens fire or other NPCs.

Retrieved from "https://metrovideogame.fandom.com/wiki/Throwing_Knives?oldid=77683"
Community content is available under CC-BY-SA unless otherwise noted.