The Traps of the post-apocalyptic metro system are as deadly as they are common. Most of the time the traps are tripwires, other times, a simple yet efficient alarm system using hanging cans. Most traps are not hard to find, being in the middle of paths to ensure they are tripped, but are usually just overlooked by the unwary.

The traps are encountered on the surface of the ruined city, and in the Metro itself. A good sum of the times a tripwire will be guarding a stash of ammo and medkits. The other tripwire trap unleashes a big wood log with many stakes and nails wedged into it, perfect for dealing with the unsuspecting. Other traps found are used as a simple, but effective alarm system, utilizing hanging cans, or piles of broken glass. Most of the different traps found in the Metro include varying forms of tripwire traps that set off whenever Artyom walks through the wire to release the mechanism. Always look for tripwires when in a hostile area, especially for places occupied by Bandits and Nazis.

Other traps will be guarding important areas such as stashes or enemy flanks, the bandits often use traps around their patrol areas or camps, and the player will encounter many of them in these areas.

Some traps are alarm-based; cans hanging on ropes will make loud clattering sounds when disturbed, bells rigged to tripwires will ring, and broken glass will crunch underfoot. Sometimes broken glass is natural in placement, and its warning serendipitous, but more often broken glass will be found scattered in narrow, dark passageways prior to guard posts (often accompanied by hanging cans), suggesting it was placed there deliberately.

The only downside is that it is only possible to disarm the grenade or bullet trip wires, any other trap must be either avoided or jumped over. The disarming procedure is quite easy, and even beneficial in return, if Artyom is missing one (or more) grenades, it will give him one. The disarming procedure is identical in all games, in Last Light and beyond, all traps that has wire can be disarmed via use key. 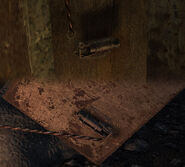 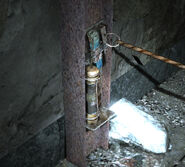 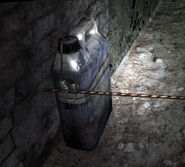 Fuel Can Tripwire. Its similar to the pipebomb Tripwire, yet stronger 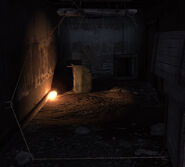