The Tsar Fish (Russian: Царь-рыба) is a large aquatic mutant encountered by Artyom in Metro Exodus. It may have potentially mutated from a large species of fish, despite it showing overtly reptilian features. It inhabits the Volga river, being worshiped by Silantius and his band of techno-phobic fanatics. The cultists have named it as "The Water Tsar".

The Tsar fish is monstrously large and heavily mutated, and seems to have developed another set of fins that almost function as front legs. This allows it to attack prey on the riverbank as well, similar to a killer whale. Despite its massive size, it can easily maneuver through tight spaces. The fish also appears to have developed vocal cords, and has a distinct whale-like call. The fish also displays remarkable intelligence, as when Artyom is navigating his way through a half-flooded terminal, it deliberately slams into the concrete pillars and walls in an attempt to knock him into the water. While the fish appears to feed on humans and mutants alike, it apparently doesn't hunt shrimp as often, possibly from reasons such as having difficulty digesting their shell and/or avoidance from life-threatening injuries.

The fish first appears after Artyom escapes the fanatic church on a rowboat. It attacks Artyom and throws him in the water by flipping his boat over. It retreats, however, when it comes under fire from Duke. From that point on, the fish will constantly stalk the river, attacking Artyom if he gets too close, be it with a boat or on foot, by walking close to the shoreline.

The fish appears again in a half-flooded terminal while Artyom is attempting to retrieve Krest's railcar. It attempts to knock Artyom into the water by slamming itself into the walls and pillars. It also feasts on humanimals. It's possible to kill the fish once inside the final control room. One must first cut the hanging corpses so they fall into the water, thus luring the fish, and then pull the lever that controls the rail cylinder. Once the cylinder turns, a great amount of debris falls into the water, and the fish is impaled by several metal rebars. Despite these mortal injuries, the fish bursts through the control room wall and lunges at Artyom once more, only to die moments later; from a combination of blood loss & sheer trauma. 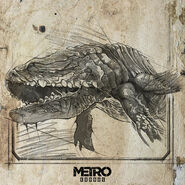