The Uboinik (Russian: Убойник, literally "murderer" or "killer"), also known as the Shambler in the English dub of Metro: Last Light and Metro 2033 Redux, and the Automatic Shotgun in Metro 2033 is an automatic revolving shotgun that was created from scrap by the metro dwellers at some point after World War III.

The Uboinik is one of the most iconic weapons of the Metro Series, featured prominently throughout the game and on numerous promotional materials. It is also one of the more useful guns in the game, being effective against virtually any opponent once up close. However, like most shotguns, it has quite a sluggish reload rate, as well as a slightly confusing reloading system.

The Uboinik has a six-chamber cylinder design similar to a revolver, but utilizes spring clamps instead of solid chambers, hence the cartridges are not fired from this location, they are only temporarily held in place before they are fed into the chamber for firing.

In Metro 2033, when tapping the "reload" button, Artyom loads one shell and cocks the gun. After that, he can load four more shells out of the remaining five since the lower clamp is blocked. After firing off three shells, Artyom has to manually cock the gun again and chamber the next shell to overcome the gap left by the empty clamp. Additionally, after firing once, the empty chambers are exposed and a full six shells can be loaded.

When holding the "reload" button, Artyom loads four shells into available clamps, cocks the gun and loads the remaining two. Reloading can be interrupted at any point. Likewise, empty clamps can be loaded at any time unless they are blocked by the mechanism. Dropping the weapon by picking up any other secondary weapon will empty all clamps and reloading can be repeated from scratch.

The reload was simplified in later games and the 2033 Redux, and pressing the reload button has Artyom begin loading the gun, which can be interrupted by pressing reload again or firing the weapon. Also unlike the original 2033 reload, the position of the clamps no longer affects reloading, as no matter what a full six rounds can always be loaded.

The Shambler in Metro: Last Light functions in a similar principle to the Uboinik in 2033, though the functional design has been altered. The entire toggle action was flipped 90° clockwise, allowing the gun to eject empty cartridges to the side as opposed to straight up; the main advantage of this is that it allows the mounting of optics directly over the action without interfering with the ejection process. The framework was also altered so the bottom clamp is not blocked off, making it easier to reload. Gameplay-wise, the Uboinik's unusual reload mechanic has also been altered for easier understanding; instead, it always reloads six shells when the reload button is tapped, unless the player interrupts the reloading sequence by pressing Fire. This also prevents the gun from potentially chewing up ammo without firing. The melee attack and the bayonet were swapped out in favor of the standard quick melee with the knife; instead, the secondary attack binding brings up the sights.

In Metro Exodus, the Uboinik returns as a formidable shotgun, but it can now be customized like other weapons in the game. One feature is the option to choose between different magazine types, from drums to traditional box-style mags. Some attachments essentially turn the Shambler into the Saiga or Abzats from previous games, two weapons that are absent in Metro Exodus. The Shambler shares some modifications with other weapons, including optics, Bulldog and Kalash stocks, and certain Ashot barrels.

Note: Attachments in Metro Exodus can be found in multiple locations and even equipped on human enemies' weapons. Therefore, the locations listed below may not be the only places to find such attachments.

The Shambler can equip five different attachments that come in three attachment slots.

The Uboinik is one of the most reliable guns in the game for close-quarters combat. Its power is quite impressive; It quickly brings down even armored infantrymen with body shots. However, it reloads incredibly slow; each shell has to be loaded by hand, resulting in a slow reload process between volleys. While not so bad against single targets or pairs, this long process can be outright fatal if one does not fight smart. Staying mobile with this weapon is vital, as is taking advantage of the fact that it can fire while it is reloading if there is ammo in the chambers. 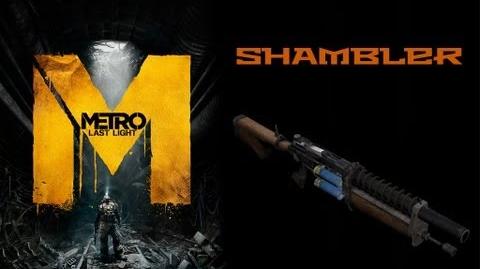 The bayonet is an improvement for this gun; it does a fair bit of damage, has no need for ammo, and saves the need to switch weapons to melee attack to break open a door or deal with a small threat, like a lurker. This could be a good backup when you do not have time to reload this complicated weapon. It also effectively doubles the utility of the weapon; by alternating bayonet attacks and shotgun blasts, the Uboinik can quickly bring down the toughest of enemy opposition with some practice. This weapon must not be ignored due to its close-range capabilities, especially in Metro 2033, which lacks the Saiga, leaving only the Duplet and the extremely rare Abzats.

It is also very effective to utilize the Uboinik as a single-shot gun. Firing the one shell of the first reload results in a quick reload of the next. This is very effective when fighting off Lurkers as one-shot will usually do them in and will not get Artyom caught up in a slow reload cycle, also, the rest of the shells in the magazine can be reserved for multiple or tough enemies. As with the Duplet, you may want to make sure you always have the Uboinik loaded before heading to hot zone due to its very slow reload, this also applies to Shambler, though its reload speed has been increased. Like Saiga-12 and Abzats, you will normally chew out a lot of shotgun shells if you use this weapon frequently, so you may have to buy some at the weapon shop.

Using the melee effectively (Metro 2033 only)[] 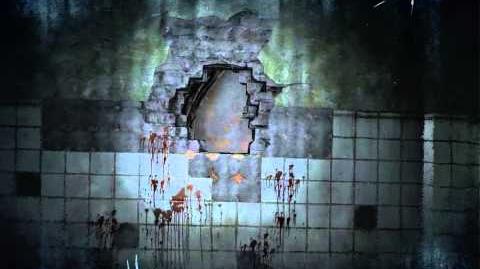 The bayonet attachment takes some getting used to. Simply pulling the trigger causes Artyom to do a quick jab forward with the weapon. Holding the fire button down causes Artyom to pull the weapon back and ready for a much more powerful thrust. The jabs are mostly used for forcing enemies back and holding the line while Artyom reloads; the power thrust is much more powerful; a single strike can prove to be fatal to an unfortunate nosalis or armored soldier with a lucky hit. Likewise, this can cause an instantly-fatal head-strike on many enemies with a fully-readied power-thrust. The bayonet attachment can come in handy in defense situations, which Artyom may not have time to reload his weapons.

Note that the bayonet, like the trench knife, has a silent attack capability (which means that it will not alert hostiles in the area), and has unlimited uses. Making good use of it can more than double the efficiency with the Uboinik.

In-game Uboinik, as seen from the first-person perspective in : Last Light.

Buying a Uboinik in Metro 2033

The Uboinik with the reflex sight, seen through Artyom's view

The Uboinik in Metro Exodus