Ulman (alternative spelling Uhlman, Ul'man, Ullman , Oulman in the French version or in Russian: Ульман) was a member of the rangers, who helped Artyom repeatedly throughout his journey. In the novel, being a companion to Artyom through the last quarter; in the game by first saving his life in trolley combat, and then being part of the team that escorts him to D6.

Little is known about Ulman's background, but he is, like most rangers, a skilled combatant. In both the novel and game he excels at stealth operations, making extensive use of the VSV, throwing knives, and a trench knife. In the game, Ulman is a larger-than-life figure who meets every bad situation with a wry smile, some wit, and liberal use of profanity. Ulman's tendency to joke about any situation he is in belies his experience and his status as a veteran. He has an adversarial relationship with Miller, who finds his wisecracks unnecessary and distracting - yet Ulman does defer to Miller as a commanding officer. A dyed-in-the-wool optimist and a man with a dark sense of humour, Ulman's good-hearted humour and stalwart bravery makes him a rather enjoyable character given the usual darkness of the Metro universe.

It is Ulman who saves Artyom from the Nazis at the beginning of the level, Trolley Combat. After which, he gives his seat in the armored railcar to Artyom, so Pavel can help Artyom, in his injured state, make it to Hole station past the Nazis in the tunnels. He continues on a separate mission on his own. Outside Black Station, when a nazi unexpectedly encounters Artyom and nearly alerts the entire station to his presence. A carefully-aimed throwing knife from Ulman ends his life before he can call for support or shoot. Not to be outdone by this awesome feat, Ulman then gives Artyom his VSV, whose silent striking capabilities are a veritable godsend in Black Station. He accompanies Artyom to Polis and later to D6, where he stays behind to guard Vladimir while he manages the missile controls. During Artyom and Miller's trip to the Tower, he repeatedly tries hailing Miller and Artyom, but interference from the tower and the Dark Ones ensures that his calls come through as little more than static.

Ulman is mostly seen using an unscoped VSV in the game, as he is carrying one in Black Station before giving it to Artyom, as well as using it in the Dungeon and Cave levels. He does not, however, use his laser sight, although Artyom does when picking his up. From the D6 level onwards, he retorts to using a standard Kalash 2012, once again without the laser sight. He is also seen using his knife at the beginning of Trolley Combat, and appears to be carrying a Duplet on his back in Black Station, just like Hunter did. He never uses it though, nor does he use his throwing knives. He also has his night vision goggles on in most of the levels where is accompanying Artyom.

Ulman, now spelled Uhlman, takes a much smaller role in Metro: Last Light. He is only seen at the beginning and the ending of the game, where he is leading Khan and Artyom to Miller and again, after the prologue. The events of Metro 2033 and its aftermath clearly weigh heavily upon him going from his tendency to crack jokes about every situation to cynicism about the coming conflict and questions Miller's actions. His personality still shines through, remaining both sarcastic and witty even under the circumstances, and still can manage a bit of humour in these embittered times, musing that Miller grilling him over a recent security breach would "be like a red-hot poker to my soul... If I still had one!" Before giving a wry smirk.

Uhlman winds up saving Artyom again, as he did in Metro 2033, when he gets knocked out by the Reds in the battle for D6, dragging the younger Ranger to safety. He is seen using a standard Kalash in the firefight with the Red Line in D6 at the ending along with most of the Spartans, both in the C'est la Vie ending and the Redemption ending. In both endings, however, Uhlman is killed in action fighting Red troops. In the book canon, he is also killed during a battle between the Rangers and Reds for control over a bunker, as described in Metro 2035.

During the Khan level in the Chronicles Pack DLC, Uhlman and a group of Rangers were tracking the Red Line captured train that Artyom and Khan were simultaneously following - Uhlman blows the train up, trapping Artyom and the Dark One on the surface, and himself and Khan inside the tunnels. Teaming up with Khan, the two make their way back to Polis, battling nosalises, rats, and the ghosts of the past.

In the novel, Ulman is more sober, yet still pro-active. As a character, Ulman serves as a powerful contrast of 'worldliness' to Artyom's carelessness. It is Ulman who is with Artyom, not Miller (there, Melnik), at the top of Ostankino Tower and it is he who openly mocks the Dark Ones towards the end. Ulman is depicted as similar age as Artyom, yet he tells of how he was about ten when the world ended, making him about thirty. This also means he was born somewhere around or sometime during 2003.

Ulman appears in the following levels: 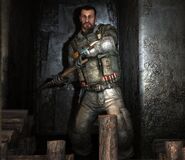 Ulman and Pavel as seen in Metro 2033 Redux.