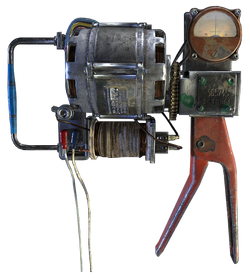 The Universal Charger is a simple but necessary device used by Artyom throughout his travels.

In a world with little electricity outside of the stations, it is a vital piece of equipment that allows Artyom to charge up most battery-powered devices. A simple, but efficient hand-operated dynamo, it can be used an unlimited number of times to charge and recharge the batteries of most electronic devices Artyom can carry. The universal charger of Metro: Last Light and the Redux version differs from its 2033 counterpart in that it charges several times faster, and if the battery is fully charged or close to it, trying to equip the charger will cause a green battery icon to shon on the screen accompanied by a sharp 'beep'.

Artyom receives it before his trip to Riga. It will see use throughout the game. It also returns in Metro: Last Light, with Artyom receiving it from Vladimir.

The charger affects the following devices:

The Universal Charger in E3 2012 demo

The Universal Charger as seen in Metro: Last Light 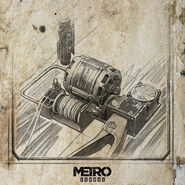