The VDNKh Commonwealth (Russian: Содружество ВДНХ) is an alliance of three stations: VDNKh, Alekseyevskaya, and Rizhskaya - formed by some inhabitants of the Kaluzhsko-Rizhskaya Line in response to the perceived threat from the Dark Ones.

Recently formed, the stations of the commonwealth joined forces to further empower the line's mushroom tea industry, and to prevent annexation from Hanza.

Every station in the Commonwealth has its own administration (formed from the actual former Metro administration workers even in the first Central Control time), the cooperation consists of free-ride for traders and citizens between the stations of the Commonwealth. Passports are issued for each station, to allow travel.

There is a strict law enforcement and harsh punishment on all stations. VDNKh also enforces labor duties on every citizen. All men from VDNKh must take armed watch in all of the tunnels leading to VDNKh, including the northern tunnel to Botanicheskiy Sad where the Dark Ones assault from. A reserve troop of men are also on watch if anything suspicious is called from the guards in the tunnel, they carry spotlights and large machine guns.

This trio of stations is one of the few radial governments situated in a dead end that can actually make ends meet and even spare some on culture. They have a small library of their own and books purchased from Polis, along with a high literacy rate with courses for its children. The stability and relative prosperity is primarily due to "specialty" tea production which is produced for a half of the Metro; this attracts people, but the VDNKh Commonwealth is not that immigrant-friendly, rarely letting anyone new into VDNKh.

In the game, VDNKh starts by VDNKh and Rizhskaya forming an alliance in response to the immediate Dark Ones threat.

Botanicheskiy Sad (Botanical Gardens), the station next after VDNKh, was lost due to fire and mutant threats early in the Metro 2033 history, but the tunnel could not have been blown up due to underground water breach threat. Neither was it closed, as the hermetic doors were dismantled even prior to that, during the Central Metro Command times. No one tried to resettle Botanichesky Sad, as something horrible dwelt in the Garden above it.

After Artyom, as a teen, and some of his friends opened the hermetic doors on Botanichesky Sad while trying to see outside world, the Dark Ones came down and started methodically assaulting VDNKh after setting up a base in Botanichesky Sad. At first the Dark Ones began sending their envoys, but humans killed them all. Because of this, the Dark Ones slowly changed their opinion about humans. With no means of cutting the tunnel off, VDNKh in a few years turned into a war-torn place, filled with fear of constant assault from the Dark Ones.

VDNKh as seen in the browser game

Alekseyevskaya, also in the Metro 2033 game on VK

Rizhskaya in the same game 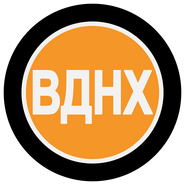 An alternative emblem of the faction which reads "VDNKh" in Cyrillic 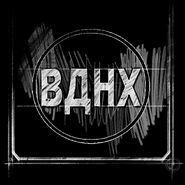