The VSV, also known as VSK-94 (Войсковой Снайперский Комплекс or Military Sniper Complex), was a sniper rifle that saw limited use with several law enforcement organizations in Russia before the nuclear war that drove humanity underground.

VSV is one of the weapons in the Metro that predates the war and it's highly prized by many survivors. Since the VSK-94 is a primary weapon it can use both dirty and MGR 5.45x39mm cartridges.

The very first VSV in the game is available for purchase in the Armory in both scoped and unscoped variants. Three unscoped versions can be found at the Black Station for free, one of which is provided by Ulman at the start of the level.

The VSV makes a return in Metro: Last Light with a few negligible changes to its model and animation. 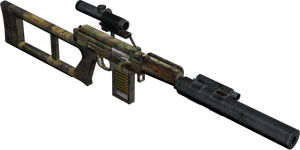 Its low rate of fire and high damage make it perfect for conserving ammunition. As with all primary weapons, the VSK-94 loaded with MGRs is capable of killing almost anything with a single shot on higher difficulties. Though rapid fire is a viable use for the VSV, it is advised to fire in bursts during close quarter combat, as its 20 round magazine means frequent, albeit quick reloads, and a tendency to rapidly consume through ammo without good trigger discipline. The VSV is a useful weapon while playing Ranger difficulties, all variants of the VSV have a laser sight attached, thus problem of the lack of crosshair can be solved to some extent. The VSV is arguably the second best firearm in Metro 2033. Unlike the AK-74M, however, it is intended for stealth and thus performs poorly in all out firefights. The VSV is also not recommended for engaging groups of mutants at close range.

Fortunately for the player there is only one human opponent in the game armed with this weapon, found in Black Station. 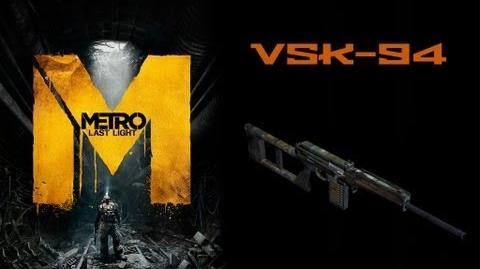 Like most returning weapons, the VSK-94 has become one of the most versatile weapons in the player's arsenal in the sequel thanks to the new attachment system. This weapon is somewhat rare like its 2033 counterpart, and you cannot buy them in shop until the very end of the game.

A suppressor is an essential attachment, since the basic version of the weapon comes with an extended barrel, and its small magazine size and relatively low rate of fire might put you in a disadvantage in an all out firefight. It is possible to use the VSK-94 without a suppressor in Metro: Last Light, but its not recommended since this gun is built for stealth, not for frontline combat. If you need firepower more than stealth, RPK-74 or the Kalash 2012 are better choices.

The VSK-94 works well against enemies at medium range, however, due to its smaller magazine and large cone of fire while firing on full-auto, burst fire is recommended. At close, full-auto is sufficient but always be ready to reload, while a 20 round magazine doesn't sound bad, it can be emptied rapidly due to the high rate of fire of the VSK-94. Also, full-auto will create a lot of recoil, making the VSK-94 difficult to control.

For a sniper rifle, this gun is under-powered and lacks accuracy at long range compared to the Valve, Preved, or Clapper, but its rate of fire, extra customization, and relatively cheap ammunition allow its user for quick follow-up shots. The VSK-94 is also more accurate than assault rifles in game. Except for long range sniping, the VSK-94 should serve the player well.

It can accept reflex, IRNV, and 2x optical sights, making it useful for both close and long range combat. Using optical sights and the laser sight is recommended for VSK-94, especially for Ranger difficulty players. The lack of the higher magnification optic means the VSK-94 is not suitable for long range combat, but there is almost no situation in game that requires such attachment, 2x magnification scope should be good enough. Adding the laser sight not only helps someone playing on Ranger difficulty, it will improve hip-fire performance and increase effectiveness while combined with lighter ammo.

As with all primary weapons, a VSK-94 loaded with MGRs is capable of killing almost anything with a single shot on higher difficulties.

In Metro: Last Light Redux, the VSK-94 stays the same as the one in the original version. In Metro 2033 Redux, only one enemy uses it, so Artyom has to purchase it from weapon vendors. The attachment system is the same as Last Light, meaning that there are more than two variants. Laser sight no longer comes as standard equipment, so the player needs 22 MGR to improve hip-fire accuracy; this is especially useful in Ranger difficulties. The silencer can be removed but this is not advised (even in 2033, unsuppressed VSK-94 is inferior to AK-74M/AK-12 in many ways). The PK-AV optic is no longer available, but Artyom can select lower-magnification optic that works wonders with night vision.

In-game VSK-94, as seen from the first person perspective in Metro: Last Light.

VSK-94 with a plastic handguard from the Metro 2033 beta.

As seen in the pre-alpha teaser trailer.

As seen in the E3 Last Light demo.

Looking through the VSK-94's scope.

Right side of the weapon.