This is the article page for vehicles. For related articles please refer to the category page. 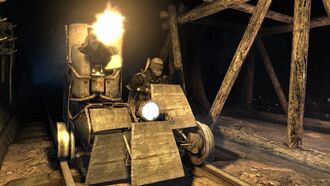 Vehicles in the Metro are usually any mode of transport used on train tracks or for quick movement on the surface. They are either manual or auto.

There are many different types of mobiles in the Metro each perfected for a specific need. It should be noted that there are two modes of transportation in Moscow, vehicles that were adapted to run off the rail lines in the Post-Apocalyptic Metro System, and those used on the Surface. Armored Vehicles are seen many times in both video games being used by the Red Line, Fourth Reich etc.

Most vehicles seen in the Metro are manually pumped for acceleration. They are notable less hard to come by and cheaper to make(hinting at why they are so common). However, that is as far as advantages go as they can't move any faster than you may pump and usually aren't very reinforced.

Auto transportation in the metro is much harder to come by. It is seen to most as a tool for a military force, or a rich man. They are tough to acquire and are less common. However, many skilled auto mechanics that survived the Great War of 2013, have adapted engine powered vehicles to the metro rail line. Mechanics also maintain and upgrade a number of pre war vehicles, enabling them to run on the surface. Organized and richer factions such as the Red Line and Hanza are known to be vast suppliers of automatic vehicles.