Venice has other uses. Please see Venice (Disambiguation) for other meanings.

Venice (Russian: Венеция), not to be confused with the Italian city, is a nickname for a flooded station in the metro, possibly inspired by the novel's mentioning of flooded stations - though primarily based on the flooded station that Ivan Merkulov visits in Piter.

Venice is an independent station, nicknamed after the real life Italian city, that is widely renowned for its unique situation. Tretyakovskaya and Novokuznetskaya, nicknamed Venice by the inhabitants, has its share of problems.

Venice is an independent station. No particular faction has a say in its politics. This is seen as both a gift and a curse. Its inhabitants enjoy large economic freedoms and the station is rather open and public to visitors, as seen in Artyom's arrival. The negative side is that the lack of authority gives way to organized crime. While some high figures in Venice may claim to be the stations leader, in reality gangsters rule to the station. They are vicious, and there is no hiding it.

Venice may have problems with controlling the rampant thievery within its walls but a more physical problem is that its streets are flooded and irradiated. This is has been caused by the nuclear spring on the surface as the snow and ice begin to melt. As the surface world thaws from nuclear winter, the water flows downward, causing the underground rivers that the metros are built upon to flood beyond the metro system's water pumps to handle. While the flooding may create many problems, it has proven to form a strong economic property as well. Fishing here is great, however, and a large economic advantage of being able to fish and sell means they no longer have to depend so greatly on farms from other stations, as overheard throughout the game. The fishermen are also known to use a scanner to determine whether the fishes they catch have dangerous levels of radiation.

The plate of State Tretyakov Gallery

Novokuznetskaya as seen in the Metro 2033 VK game

Tretyakovskaya as seen in the Metro 2033 VK game 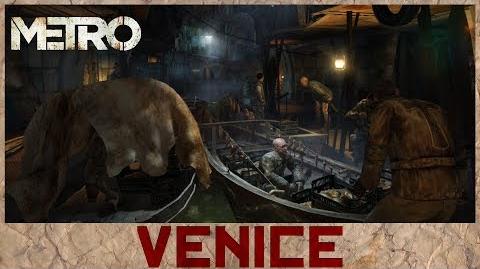