Setting of the Sam's Story DLC.

Vladivostok (Russian: Владивосток) is a location of the Universe of Metro 2033 that is also featured in Metro Exodus, where it serves as the main setting of the Sam's Story DLC.

Vladivostok is a city in eastern Russia located on the East Sea, and is the country's largest Pacific port. Unlike most major cities in Russia, Vladivostok did not suffer a direct nuclear strike during the great war of 2013. Instead the warheads were aimed in a straight line offshore, resulting in a giant tsunami upon detonation, devastating the city and killing most of the population. The survivors banded together under the leadership of the Captain, who used the nuclear reactors from the submarine he commanded to fuel the city. His position was soon usurped by Tom, an American arms dealer who brought the city under his harsh, but mostly fair rule.

Aside from its bandit problem, the city is also infested with mutants, particularly humanimals, but also lurkers, watchmen, shrimp, and worms. The most dangerous of them, however, is the batwing, also known as Seraph, a particularly large and vicious demon that controls a swarm of smaller mutated bats and prowls the skies of the city looking for prey. Conversely, humanimals have become a crucial part of the city's economy, as the beasts are strong and trained relatively easily. Aside from fishing, humanimal trapping is the most common profession in the city.

The followers of the Exodus sect, preaching at the stations of the St. Petersburg metro, believe that a ship with survivors from Vladivostok entered the Gulf of Finland and ready to take everyone on board. According to the sectarians, they are also responsible for the lights at the Kronstadt lighthouse, thereby giving signals to the city. After the expedition of the Primorsky Alliance expedition to Kotlin Island in October 2033, it turns out that the story of survivors from Vladivostok is nothing more than a legend invented by the “Exodus” in order to lure the extremely curious to Kronstadt, where they are subsequently eaten by the sect.

In December 2033, an expedition from Saint Petersburg led by Taran arrived in Vladivostok. Having landed on the ekranoplane in Golden Horn Bay, this detachment goes for reconnaissance in the city, gets acquainted with the local life forms, and take on the search for a cure for radiation.

Vladivostok is an abandoned city. A few dozen kilometers from the city, in Sysoev Bay, hides an underground temple in which the Underground lives — a scientist who had a hand in creating a means to remove radiation. In the city itself, there are huge snakes covered with thorns that settle in flooded areas, where reasonable gray-skinned amphibian mutants from Pavlovsky Bay sometimes wander. The largest settlement closest to Vladivostok is one hundred and fifty kilometers to the east and is a Zapovednoye recreation center isolated from the whole world, where a submarine crew lives with ordinary people.

In Metro 2035, Artyom, Savely, and Lyokha cleared the Hanzeatic outpost at the radio suppression station and turned off the jammers, they hear signals from other cities on the radio, including a message from Vladivostok.

Sam, an American ranger with the Spartan Order, enters Vladivostok in order to return to his homeland in the Sam's Story DLC. 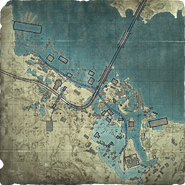 Map of the playable area in Sam's Story