Key location of books from the Universe of Metro 2033 series.

The Warsaw Metro (Polish: Metro Warszawskie, literally "Varsovian Metro") is an underground rapid transit system serving the city of Warsaw, capital of Poland. It is a key location in the novel Achromatopsia, as well as being featured in several short stories from Whispers of the Fallen, Echo of an Extinguished World, and In Ruins.

What has come to be known as Armageddon is said to have lasted only 45 minutes. However, it wiped out the vast majority of the city's population. Those who were lucky enough to be travelling using the Varsovian Metro during this time managed to survive by staying beneath the surface of the earth. The sudden collapse of government and other institutions that people have become used to living with were followed by a period of chaos and infighting between the newly-forming factions of the Warsaw subway's inhabitants. Actors, famous journalists, celebrities, and businessmen were not let inside the metro by the rest of the surviving population, while politicians were exiled completely.

Outright warfare between groups living in the metro eventually stopped with the arrival of a new enemy from the outside - the grey-skinned, heavily mutated lifeforms of the surface, hungry for human flesh. Although venturing above ground had always been dangerous due to the radiation and merciless winter, leaving the metro became synonymous with suicide for all but the most experienced of stalkers after the mutants appeared. What ensued from this was the formation of a Great Council of leaders from each station of the Varsovian Metro, which would meet periodically to discuss how to combat threats from the surface more effectively as well as solving Warsaw's internal affairs.

Denizens of the Varsovian Metro live mostly on mush made from protein processed from mushrooms with starch and other fillers mixed in; military rations and other preserved foods are considered a luxury. A popular beverage consumed throughout the metro is a mushroom infusion popularly named "tea". On the surface, the nuclear winter may have killed off all the plantlife, but it has bred countless species of grey-skinned, man-eating predators: rabbit-sized cockroaches, Nosalis-esque hordes, a strange cross between bear and dog, gargantuan and disgusting insects, as well as even more unsettling humanoid creatures.

Stations of the M1 Line[]

The Warsaw Metro is home to thousands of survivors, their exact number unknown. The most powerful station in the metro is without a doubt Ratusz Arsenał, often referred to as "The Capital" of Warsaw's subterranean population, and the seat of every session of the Great Council. Ratusz Arsenał's domination is not hard to explain, because the main reason behind their power is the fact that they are the only faction in the metro with access to significant numbers of firearms and ammunition, having taken it from the police headquarters situated close to the entrance of their station above ground. The Capital also benefits from its somewhat central location in the metro, meaning that various trade caravans between north and south must pass through their territory.

Perhaps the second most important group is the large Radom Coalition of Wierzbno, Wilanowska, Służew, Ursynów, Stokłosy, Imielin, and Natolin stations in the south. The Radom Coalition is a considerably open-minded and liberal faction, perhaps partially due to the wise age of its female director. Kabaty, the southernmost station at the end of the Coalition, has fallen to massive attacks of mutated wildlife from the surface.

In the north, at Wawrzyszew and its surrounding tunnels live the bandits of football ultras from before the war, considered the most violent and primitive of the societies inhabiting the Varsovian Metro. Commanded by the middle-aged Mister Krupa, they form a military and political alliance with the New Vatican, at Plac Wilsona station, who are known for their apparent spirituality and shady dealings with the criminal underbelly of the metro.

Meanwhile, much further down south, are the Scholars living at Politechnika station - relied upon by the rest of the metro for most of the machines, equipment, and expertise required to keep things running. Between them and the Radom Coalition is the central warehouse at Racławicka, a station headed by a young chief.

Once the metro's busiest station, Centrum is now nothing but a ruin since its ceiling collapsed during the bombardment of the city. The Palace of Culture and Science, not far from Centrum, is entwined in gigantic spiderwebs and nests of flying monsters. The tunnel between Nowy Świat-Uniwersytet and Centrum Nauki Kopernik is a terrifying zone that plays psychological tricks on those who attempt to pass through it, while the aforementioned CNK station has turned into a massive well due to flooding. The Vistula itself, at least near Warsaw, has frozen all the way from surface to riverbed.

Stations of the M2 Line[]

Świętokrzyska-2 (the lower level platform of the station) is colloquially known as "Vietnam" or "Little Asia", home to some of Warsaw's Vietnamese minority from the pre-war days. It has become a busy and efficient underground city of connected tin shacks, famous for its better food and untouchable thanks to its connections. The tunnel between Świętokrzyska and Ratusz Arsenał is the most well-maintained thoroughfare of the Warsaw Metro.

Across the river, isolated from the rest of the underground society, is Dworzec Wileński station of the M2 metro line - known as "Wileniak". It's ruled by a wise old woman called Sylwia Strzelecka, known as "The Empress". The lower level of Wileniak is partially flooded and serves as a farm for vegetables, where child labour is employed using kids that were born on the surface and thus affected by radiation poisoning. The denizens of Dworzec Wileński also use these children to help stop the station from being completely flooded by water entering from the previously sunken Stadion Narodowy station.

Ironically, above ground the National Stadium itself has remained almost untouched, and its white-and-red colours stand out from the monochromatic greyness of the post-apocalyptic capital. Efforts to settle the Warsaw Metro's unfinished Bródno station by the Wileniak's East-Varsovian Company on the M2 line are underway, but internal struggles between the factions involved get in the way of further development. 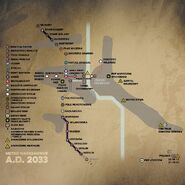 In Ruins features three short stories set in and around Warsaw

Achromatopsia is the first full novel of the Metro Series set in the capital of Poland
Русский
Community content is available under CC-BY-SA unless otherwise noted.
Advertisement