This is the article page for weapons. For related articles please refer to the category page. 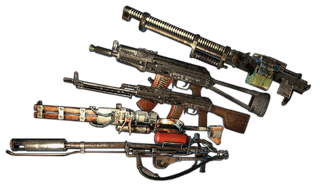 Weapons are the tools or devices designed to inflict damage or harm and used for offensive or defensive purposes. In the post-apocalyptic world of Metro, weapons are often necessary for survival in the harsh conditions full of hostile creatures (or equally hostile humans) and thus, many, if not most Metro inhabitants and other survivors carry some form of a weapon. This can be anything from a simple knife to crude metro-made firearms (like the Bastard) to sophisticated pre-war weapons like the Kalash 2012. Weapons appear both in the novels and in the games of the Metro universe, but in both media, they are presented quite differently.

In the novels, weapons are hardly ever referred to with their exact designation. Sometimes, however, it's possible to figure out what weapon is being described. VDNKh convoy guards are said to carry "bulky military 7.62 calibre "machine guns" with wooden butts" which are probably AKMs, RPKs or perhaps (although this is unlikely) even PKs. The weapon carried by Bourbon and some Hansa guards is most likely AKS-74u ("It was also a Kalashnikov but it was cut-off like the ones held by the Hansa border guards, with a hinged butt and a short socket instead."). In Metro 2034, Hunter carries a bulky pistol which is implied to be Stechkin APS. In Metro 2035, the weapons used by the Rangers are said to be silenced AK-74s. It's possible that, as Artyom was not a soldier before joining the order, he didn't know the exact names of the weapons, but when he joined the Rangers, his knowledge of weapons increased, so he started to recognize the specific weapon models.

As all Metro games (These include Metro 2033, Metro: Last Light, and Metro Exodus) are first-person shooters, weapons play a significant role in them. A wide variety of weapons are available that can be separated into several classes. Below is a list of weapons in all Metro games grouped by weapon class.

Handguns are small firearms which are usually held by one hand in their default form. However, most handguns appearing in the games can be modified and converted into rifles or small carbines, which are fired using both hands.

Assault rifles is the most numerous weapon class in the game. These are automatic weapons that fire intermediate cartridges. In the games, this class also includes carbines and light machine guns.

Sniper rifles are semi-automatic or bolt-action weapons for long-range combat. They usually fire high caliber bullets with immense stopping power but their rate of fire is low and they are too cumbersome to be used in fast-paced close-range combat.

Shotguns are close-range weapons that fire buckshot. They are very effective against mutants but they often take a considerable amount of time to reload.

Pneumatic weapons are an interesting concept that emerged in the Metro after the war. These weapons use compressed air to fire various metal projectiles.

Heavy weapons are a diverse class which includes various weapons capable of delivering heavy firepower at the cost of being very cumbersome.

This class includes various (even non-lethal) throwable pieces of equipment, as well as explosives that can be either thrown or placed down.

This class includes weapons which cannot be moved under normal conditions and are instead fixed to various tripods or mounted on vehicles.

In all Metro games, weapons have various attachments and upgrades available to them which can modify their functionality. However, the methods of obtaining modified weapons differ greatly between all games.

In Metro 2033, there are no direct customization options, however, some weapons have multiple variants which can be found, or, more commonly, bought at weapon vendors. Weapon variants usually differ in their sights - one variant has iron sights while the other has some form of scope and/or laser sight. The Shambler has a unique variant equipped with a bayonet. The Revolver has the most variants of all weapons, as versions with long, short or silenced barrel, long or short stock and with or without a scope appear in the game.

In Metro 2033 Redux, weapons can be customized the same way as in Metro: Last Light.

Metro: Last Light introduces an attachment system available for most weapons. Almost all weapons can equip some form of sights (a red dot sight, a scope and/or a laser sight) and an extended magazine. There are also more unique options for specific weapons, like various barrel modifications, muzzle devices or stocks. A list of attachments available for each weapon can be found on their respective page.

Metro Exodus technically has the most amount of handheld firearms in the series, even though it does not seem like it at first glance. This is due to the new customisation mechanics introduced in Metro Exodus, that allows weapons to essentially become entirely different weapons with certain modifications.

Not including any promotional weapons, DLC weapons, or weapons added in Redux, the handheld firearms/pneumatic weapon count per game is as follows:

At face value, Metro Exodus only has 10 weapons. However, if you factor in the modifications that can be made in Metro Exodus, that number climbs from 10 to 19.

The following is a list of these "hidden" weapons:

Of course, this can come down to each individual's criteria of what classifies as a "new" or "different" weapon, but it is an interesting thing to consider nonetheless.