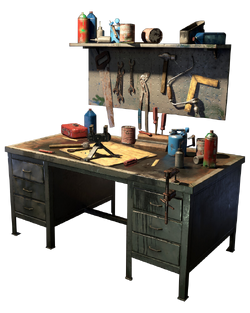 The workbench is a new gameplay feature in Metro Exodus, a part of the crafting system which allows the player to produce all kinds of craftable items in the game, to modify Artyom's weapons and equipment, to clean weapons, to repair a damaged gas mask, and, under certain conditions, to swap one's weapon for any of the previously collected weapons.

Workbenches can be found in settlements, hideouts (most of Krest's hideouts scattered around the Volga include a workbench), and on the Aurora (Tokarev sets up a workbench on the train during the Volga chapter and later expands it and moves it to its carriage). Most workbenches look similar to each other (see the picture on the right), with only minor differences between them.

Workbench gives the player more possibilities than the backpack. Some items can only be crafted at a workbench, furthermore, weapon cleaning, gas mak repairing and suit modification are also available only at a workbench.

Crafting is a gameplay mechanic that allows the player to produce ammunition and consumables. You can read more about it in the dedicated article.

Weapons need cleaning in order to work at maximum efficiency. Dirty weapons have worse accuracy, rate of fire and are prone to jamming. Only the weapon that the player is using gets dirty over time, while certain conditions (dust storms, falling into water etc) significantly speed up dirt accumulation. Cleaning the weapons is only possible at a workbench and requires Chemicals.

Artyom's gas mask, electrical equipment, armour and bracer can be customized at a workbench, using upgrades collected while exploring the in-game world. Each modification can affect the stats of the given piece of gear, such as allowing you to carry more ammunition, increasing your armor protection, or even adding completely new functions, like a metal detector or a motion sensor mounted on the bracer.

Modifying weapons is possible both at a workbench and using a backpack. Weapons accept a wide variety of attachments, such as various sights and lasers, and even their individual components can be swapped out for something else (for example, most weapons can equip longer and heavier barrels, increasing accuracy and damage, or improved grips and stocks, which make it easier to control the weapon's recoil). Any collected attachments and upgrades can be mounted to any weapon that accepts them at any time, with no additional cost. List of attachments for each weapon can be found at their respective pages.

Neither weapon attachments, nor suit upgrades can be directly crafted. They have to be found in the game world, either looted from dead enemies, or just found while exploring. The workbench can only be used to equip already collected upgrades.

Any craftable item can also be scrapped, or dismantled, in order to receive a small amount (rougly 20 % of the crafting cost) of crafting resources back.

The workbench found at the Aurora has one more unique function - the player can swap their weapons for any of the previously collected weapons there. Any weapon equipped this way will be at full condition (no dirt at all) and in its most default configuation, although it can be immediately modified with whatever upgrades have been collected by the player. It should be noted that unlike the base weapon, the upgrades and attachments will not be at full condition; rather, they will be as clean or dirty as they were previously, and must be cleaned by Artyom himself.

Crafting ammunition at the workbench

Modifying the suit at the workbench

Modifying the gasmask/helmet at the workbench
Community content is available under CC-BY-SA unless otherwise noted.
Advertisement