Despite being called worms, they resemble giant leeches more than they do earthworms and come in three different sizes;

The first variant is a tiny inch-long leech that can be seen attempting to suck through Artyom's armour and gas mask after a Third Variant Worm spits radioactive goop at Artyom. This Variant is entirely a cosmetic one, much like the little spiders seen crawling around Artyom after walking through a cobweb.

The second variant is about the size of a small dog. It clings to walls (or the ground) and spits acid at intruders or prey. These worms can be looted for chemicals and will stay in the same spot where they are found. In the Dead City, these worms have pink/purple colour while in The Two Colonels', their mouth and parts of their body also glow with a yellowish/green light. This change was probably made so that they are more easily visible, because of the section where they are encountered is fairly dark and Khlebnikov, unlike Artyom or Sam, cannot use a flashlight to illuminate the area.

The third variant is much bigger, spanning about 6-8 meters in length, its resemblance is closer to a bobbit worm. It too spits acid at intruders (or prey), though these attacks deal more damage. Along with the acid, they spit smaller worms, though these are harmless to Artyom because of his suit and gas mask. This would imply that the worms reproduce asexually, and would explain their rapid infestation. The smaller worms attempt to cling to Artyom with sucker mouths and make a faint squealing sound.

Worms prefer damp environments and thrive in the flooded station they have occupied. While the smaller ones cling to walls, the larger ones prefer to swim through the water and tunnels. They seem to hunt nosalises as well as humans like Artyom. The tunnels they inhabit are also covered in a kind of vicious, organic film that reacts to light and movement, but seems to be distinct from the worms themselves. The film resembles and may have been inspired by masses of tubifex worms that are known to form in underground sewers or tunnels in the real world, albeit mutated to extreme sizes by the radiation present in Novosibirsk. Worms can also be found in the city of Vladivostok, although they are confined to a single flooded building. This would imply that worms prefer enclosed spaces, even on the surface.

The mouthparts of the large variety seems to resemble that of a bobbit worm or sand striker. This is much more noticeable upon a closer look of dead ones, as their jaws tend to hang open after they are killed. 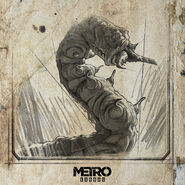 A drawing from Artyom's diary showing the largest worm variant